Looking for movies about vampires on Netflix to watch? Look no further, as we’ve got you covered! From action-packed thrillers to heart-wrenching dramas, there’s something for everyone on this list. So strap in, and get ready for a good scare!

Bram Stoker’s Dracula is a classic that is sure to please any fan of the genre. The movie, which was released in 1992, stars Gary Oldman as the titular character.

Bram Stoker’s Dracula is a classic horror that has been terrifying audiences for generations. The movie, which was released in 1992, follows the story of Count Dracula, a vampire who moves to England in order to spread his curse.

This film is a great adaptation of Stoker’s novel that, despite being over 100 years old, is still one of the most popular vampire horror novels ever made. The movie’s mix of suspense, terror, and romance continues to captivate audiences today. If you’re looking for a classic horror movie to watch this Halloween, Bram Stoker’s Dracula is a perfect choice.

The Lost Boys movie from 1987 is a must-watch for all fans of the vampire genre. It tells the story of a group of young vampires who live in a small town in California. The movie was directed by Joel Schumacher and stars Kiefer Sutherland, Jason Patric, and Corey Feldman.

This black comedy has been ranked as one of the best vampire movies of all time and has spawned a sequel and a television series. The movie is beloved by fans for its dark sense of humor, its rock n’ roll soundtrack, and its iconic scenes.

3. Interview with the Vampire

The vampire movie genre has been around for decades, but it wasn’t until 1994 that one truly captivating film was released: Interview with the Vampire. This movie, based on the novel by Anne Rice, follows the story of Louis (played by Brad Pitt), a young man who is turned into a vampire by Lestat (played by Tom Cruise). The two then embark on a journey together, during which Louis must come to terms with his new identity.

The movie was a critical and commercial success, grossing over $105 million at the box office. It received mixed reviews from critics but Cruise and Pitt’s performances were praised. Rice herself was also pleased with the adaptation of her novel.

Since its release, Interview with the Vampire has become a cult classic, and its impact can still be felt today.

The Twilight Saga is a series of five movies based on the Twilight books by Stephenie Meyer. The movies follow the story of Bella Swan, a human girl who falls in love with a vampire, Edward Cullen.

Twilight Saga movies are all available on Netflix. They are rated PG-13, so they may not be suitable for younger viewers. However, they are still very popular among Twilight fans.

If you’re a fan of the books or the movies, you can watch them all on Netflix.

Salem’s Lot is a 1975 American vampire horror film directed by Tobe Hooper and starring David Soul, James Mason, Lance Kerwin, and Bonnie Bedelia. The film is based on the novel of the same name by Stephen King. It tells the story of a group of people who are terrorized by a vampire who has taken up residence in a small town in Maine.

So whether you’re a fan of Stephen King’s novel or just curious about the movie, be sure to check it out!

The Blade movies are a series of action films based on the fictional Marvel Comics character of the same name. The films star Wesley Snipes as Blade, a vampire hunter who protects humans from vampires.

The first film, Blade, was released in 1998 and was a box office success. It was followed by two sequels, Blade II (2002) and Blade: Trinity (2004). All three films were well-received by fans and critics alike, and helped to kick off the comic book movie boom of the 2000s. Blade movies are some of the most stylish and action-packed superhero films ever made, and are definitely worth checking out if you’re a fan of the genre.

7. What We Do in the Shadows

What We Do in the Shadows is a 2014 New Zealand comedy horror film directed by Taika Waititi and Jemaine Clement. The film follows a group of vampires who live together in Wellington, New Zealand.

The film was a critical and commercial success, and was praised for its humor, direction, and acting. It was nominataed for several awards, including the Academy Award for Best Makeup and Hairstyling.

What We Do in the Shadows is a hilarious and clever take on the vampire genre that is sure to please fans of both horror and comedy.

Looking for a good vampire movie to watch on Netflix? Check out our list of the best vampire movies on Netflix 2022. From classic films like Nosferatu to modern hits like The Twilight Saga, there’s something for everyone on this list. So curl up with a bowl of popcorn and enjoy one (or all) of these great vampire films. You can watch these movies easily through Spectrum internet, cable tv, or other resources. 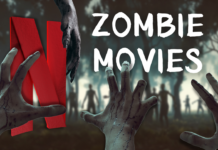