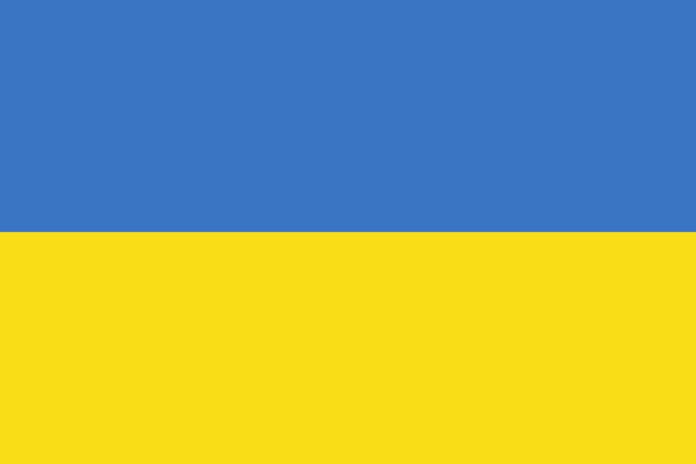 Theoretically, A flag is defined as a piece of fabric with a proper design and set of colors. The primary use of the flag that it is a symbol used to identify countries. During ancient times, early explorers always put crosses or sculptures whenever they capture barren land and later they start using flags to proclaim the land and show sovereignty. The flag also depicts the community, organisation or nation we belong to and also national symbols. Here is the list of blue and yellow flags in the world,

Sweden is a beautiful country with blue and yellow flags officially known as the Kingdom of Sweden. This is the 4th largest country in Europe as per the land area and the main official language of Sweden is Swedish. It also has five other official languages such as Finnish, Yiddish, Sami, Meänkieli and Romani. Stockholm is the capital of Sweden which is also the country’s largest city with approximately 850,000 inhabitants living in the city. It shares its border with Scandinavian counterparts Finland and Norway and also it is connected with Denmark by a bridge. The country is also famous for its northern lights, or aurora borealis that appear above the Arctic circle. This is visible during the dark of winter in Sweden.

Also Read: Top 10 Green And White Flags In The World 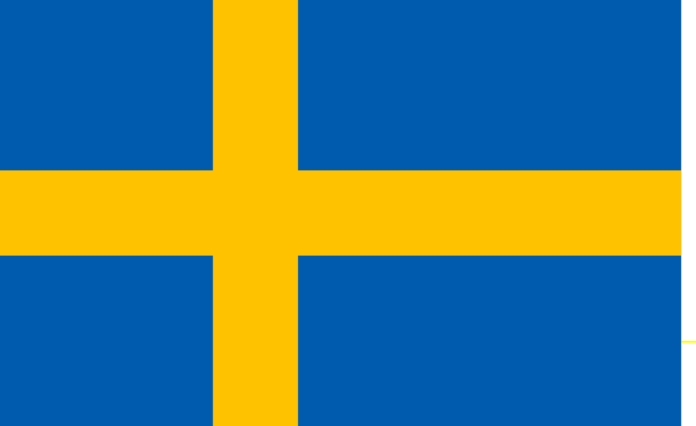 Cheshire is also one of the beautiful countries with blue and yellow flags located in the north-west of England and registered by the flag institute on 10 April 2013 and it includes banner of arms of the former Cheshire County Council which was granted on 3 May 1938. It includes three golden sheaves of wheat and a golden blade on a blue background. Since the 12th century, the design of the flag has been associated with the Earldom of Chester and it is being used in the coat of arms of Chester since at least 1560. The Cheshire flag was flown alongside the Union Flag above the Department for Communities and Local Government.

The European Union flag is an official flag that is used by two separate organisations such as the Council of Europe (CoE) and the European Union (EU). The design of the flag was conceived in 1955 and it was officially adopted by the European organisations in the year 1985. This flag is used by different European organisations as well as by unified European sporting teams under the name of Team Europe. This is clearly an adoption as an official symbol of the EU and it was planned as a part of the proposed 2004 European Constitution which was failed to be ratified in 2005. The blazon given by the EU in 1996 describes the design as: “On an azure field a circle of twelve golden mullets, their points not touching.” 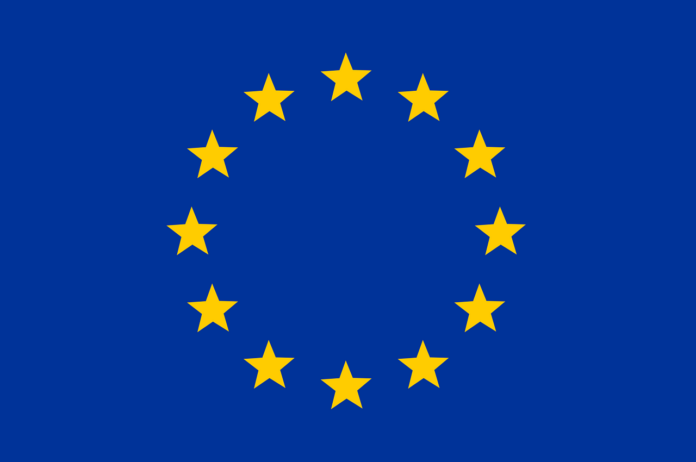 Oregon is a two-sided flag with blue and yellow flags situated in the Pacific Northwest region of the United States. The front side of the flag is the escutcheon from the state seal and on the second side, it is a gold figure of a beaver which is the state animal of the state. Oregon is the 9th largest state in the United States with an area of 254,806 square kilometres. The capital of the state is Salem which is located centre of the Willamette Valley of the Willamette River. The highest point in the state is Mount Hood with an elevation of 3,429 meters and its lowest point is the sea level of the Pacific Ocean.

Alaska flag has eight gold stars that look like the Big Dipper and Polaris on a blue field making it one of the best blue and yellow flags in the world. The design of the flag was created by Benny Benson of Seward and was selected from 700 entries in a 1927 contest. Also, the flag was among the fifth-best in design quality by comparing the 72 Canadian provincial, U.S. state, and U.S. territory flags ranked. The flag was followed by the flags of New Mexico, Texas, Quebec, and Maryland respectively.

Kazakhstan flag was adopted on 4 June 1992 by replacing the flag of the Kazakh Soviet Socialist Republic. The flag was designed by Shaken Niyazbekov that had a gold sun with around 32 rays above a soaring golden steppe eagle with a sky blue background. The gold and blue colors in the flag depicts the former Soviet flag and also the patterns represent the art and culture of the Kazakhstan flag. The sun in the flag of Kazakhstan has 32 beams, which symbolize progress and prosperity and the eagle symbolizes the power of the state. The flag has 32 rays above a soaring golden steppe eagle, both centred on a sky blue background. The rays of the sun depict the source of life and energy. 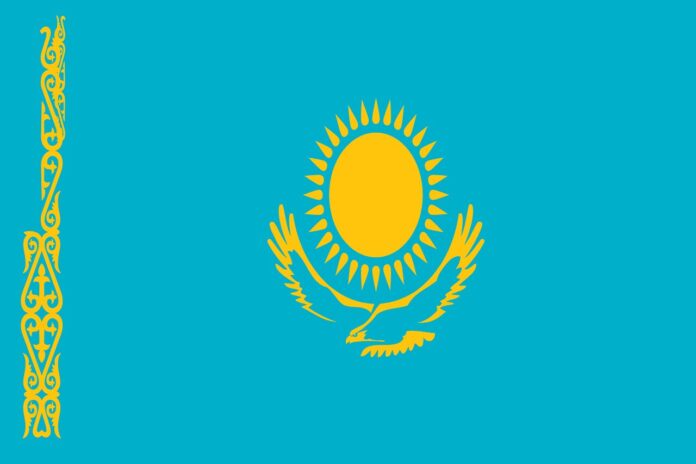 The Indiana flag was designed by Paul Hadley and it was adopted by the state in the year 1917 on 11th May. This was the first official flag and the only change was the creation of a statute to standardize the production of the flag. The symbols of the flag were also used in the Indiana Bicentennial Torch Relay in 2016. The avarage altitude of the country is 230 meters (760 feet) above sea level. Teh highest point in the country is Hoosier Hill situated in Wayne County with an elevation of 383 meters above sea level. 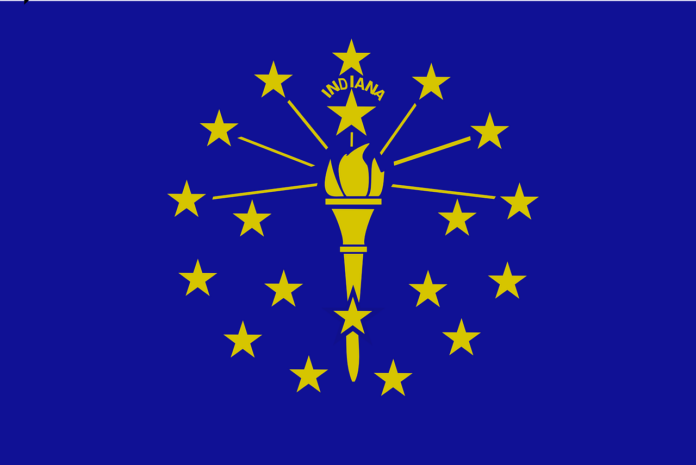 The flag of Ukraine has a simple two equally sized horizontal bands of blue and yellow making it one of the simplest blue and yellow flags in the world. The blue colour represents the sky of the colour and yellow represents wheat. The combination of both colors shows the Ukrainian lands comes from the flag of the Kingdom of Galicia–Volhynia which was used in the 12th century. The flag day was celebrated in the country every year on 23 August since 2005. The flag was officially adopted for official ceremonies in September 1991 following Ukrainian independence and later it was officially restored on 28 January 1992 by the parliament of the country.

Palau flag was adopted on 1 January 1981 after it was separated from the United States Trust Territory. It has one of the best blue and yellow flags where blue represents the ocean and all the nation lies within. The flag was introduced in 1981 when the country was declared a republic. The light blue colour on the flag represents the Pacific Ocean and also represents the transition from foreign domination to self-government. The golden disk in the middle is slightly off centred and represent the moon. 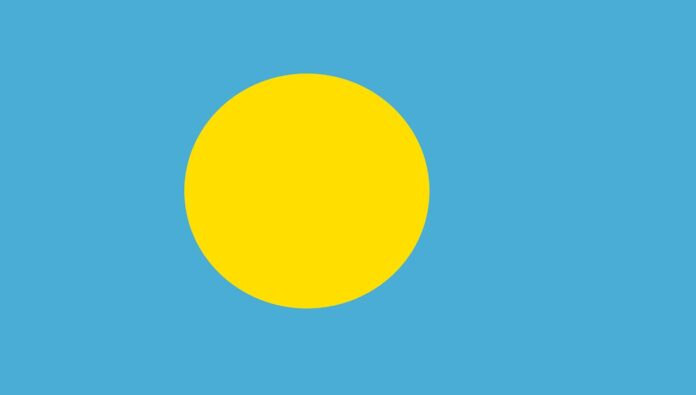 11.Flag of Bosnia and Herzegovina

The flag of Bosnia and Herzegovina was adopted in the year 4 February 1998. after it becomes independent from Yugoslavia. The flag contains a combination of blue vertical band, with a yellow triangle along with seven full and two half-white five-pointed stars. The triangles represent the three constituent peoples of Bosnia and Herzegovina that includes Bosniaks, Croats, and Serbs. The stars representing Europe should be infinite or numerous in numbers and hence they continue from top to bottom.

The City of Opole has a flag consist of two horizontal stripes of blue and yellow flags in the world. The city has been located in southern Poland on the Oder River and the historical capital of Upper Silesia. The city is also the capital of Opole Voivodeship (province) and the seat of Opole County. The first settlement is associated with the town being granted Magdeburg Rights in 1217 by Casimir I of Opole.

The flag of Asturias represents the “Cruz de la Victoria” ( Victory Cross ) in yellow ( PMS 109) over blue (PMS 829). The design of the flag contains a victory cross which is off-centred toward the hoist over the blue colour of the flag. It is belived that the origin of the flag has been associated with the Asturias is in 1808 which is during the  Peninsular War.

The offcial flag of Kansas is associated with the dark-blue silk rectangle representing Kansas arranged horizontally with the state seal aligned in the centre. There is a sunflower that sits over a bar of gold and light blue. The centre of the flag is the state seal that tells the history of Kansas and its figures representing pioneer life. There are thirty-four stars clustered at the top of the seal that represents the 34th state to be accepted into the Union of the United States.

These are the blue and yellow flags in the world. Kindly share and do post your comments. 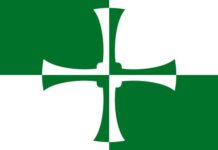 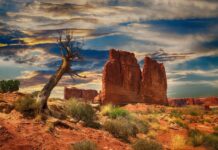 A List of 10 Beautiful National Parks In The USA