Prathamesh Jaju, a 16-year-old Pune boy has gone viral on social media for capturing one of the most detailed images of the Moon. He revealed he took over 50,000 photos.” I captured for around 4 hours and it took 38 to 40 hours for processing. The reason behind 50,0000 images was to get the clearest picture and later it has been stitched together and later sharpened the image to see crisp details.

Prathamesh Jaju, who calls himself an amateur astronomer and astrophotographer, is the man behind the viral images. According to him, this is his most detailed and clearest shot of the third quarter Mineral Moon.

Calling the shot Last Quarter Mineral HDR Moon Composite, the boy in an Instagram post revealed that he “captured around 38 panels at 1500 and 3000mm Focal Length with a 1.2megapixel ZWO ASI120MC-S which made the image almost 50 megapixels huge.”

He added, “Raw data was 100GB and when you process it the data gets bigger, so it was around 186GB. When I stitched them together, the final file was around 600MB. I captured the image on May 3 at 1am. I captured for around 4 hrs with videos and images. It took 38-40 hrs to process. The reason behind 50,000 pictures was to get the clearest picture of the Moon. I stitched them together and sharpened the image to see crisp details of the Moon.”

According to Pratham, he first read articles and watched some YouTube videos to gather information about processing and ways to capture these images. “I want to become an astrophysicist and study astronomy professionally but astrophotography is just a hobby for me right now,” he told ANI. 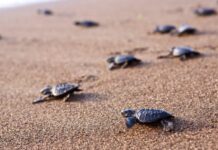 Over 60 lakh baby turtles emerge from eggs at a beach in Odisha, pics surface