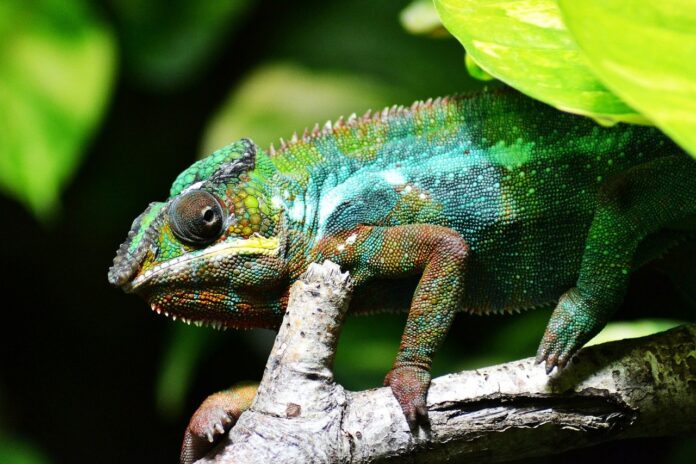 The animal kingdom is vast and many species changes colour or even pattern for multiple reasons. The primary reasons are camouflage, shock predators, or even hypnotizing prey. The best example is Chameleons that changes colour as a result of the mood change mostly when they are angry or aggressive and due to moisture, light & temperature factors. Here is the list of color changing animals in the world,

Pacific tree frog is also known as the Pacific chorus frog which is mostly seen in regions the Pacific Northwest, from Northern California, Oregon, and Washington to British Columbia in Canada and extreme southern Alaska. It is one of the color changing animals to green, tan, red, brown and green depending on the surroundings. It is also helpful in defending themselves from predators and change colours over periods of hours and weeks.It can grow upto 2 inches from snout to urostyle where males species are smaller than females and have a dark patch on their throats.It feeds on diving beetles, giant water bugs, bluegill sunfish, and garter snakes.The purple frog is one of the famous purple animals in the world.

Cuttlefish are also known as the expert camouflagers of the sea. As of now, 120 species of fish has been identified and all of them has eight arms and two extendible tentacles covered in sucker disks. It changes color to match its surroundings in less than one second. They also change colour as they swim through teh corals and rocks in the sea. It is also helpful in catching the prey and the color changing phenomena is amazing when you get to know that they are actually colourblind. The species has three hearts where two will help in pumping blood to the gills and the third is used to circulate oxygen. The avarage lifespan of the species is 1 to 2 years.

Chameleons is one of the most popular color changing animals that actually depends on the mood, changes in light or temperature, or the humidity of their environment. The unique part is that the Chameleons can move their eyes separately to 180 degrees and hence they can see 360 degrees if they need to. It is helpful in identifying predators which are coming or attaching from the backside. As of now, 59 unique chameleons species has been identified that can be only seen in Madagascar island and nowhere else across the globe and a total of 150 chameleons are known in the world divided into four genera of Bradypodion, Brookesia, Chamaeleo, and Rhampholeon. Some researchers and scientists even identify two more genera Calumma and Furcifer where additional species can ne name.

Golden Tortoise Beetle scientifically known as Charidotella sexpunctata is a species of beetle that belongs to the family leaf beetle family known as Chrysomelidae. It can grow upto 5 to 7 mm in length and mostly seen in the regions of eastern North America, west to about Iowa and Texas. One of the three species of tortoise beetle found in Florida commonly known as golden bugs and changes its colour when threatened to goldish orange. It will usually take 2 to 3 minutes in the process and it will even surprise and disguise the predator. The battle consumes foliage of plants such as bindweeds, morning glory and sweet potato.

Flounder is one of the types of flatfish and as of now, 30 species of flounder can be found in the tropical and temperate coastal waters of the Atlantic and the Pacific Ocean. It is mostly seen on the ocean floor near coral reefs, bridge piles and docks. It can grow upto 5 to 25 inches in length where females are larger than males. The flatfish is generally brown coloured with various red, orange, green and blue markings on the body and changes its color in a span of 2 to 8 seconds depending on the environment and habitat. The markings and even the colour get changed when they will move to a new location or habitat. The varage lifespan is 3 to 10 years in the wild.

Giant Pacific Octopus is one of the color changing animals distributed in the regions of the Northern Pacific Ocean from Japan to Alaska and California. It belongs to the order Octopoda and the family of Octopodidae. The largest species of octopus species in the world can grow up to 16 feet when fully grown and weighs approximately 110 pounds. The highest recorded species weighs around 600 pounds and measured 30 feet across in length. It will change colour in one-tenth of a second and seen at a depth of 330 feet (100 m) underwater. The avarage lifespan of the species is 2 to 3 years on average and have 2,140 to 2,240 suction cups on their arms that provide them powerful grip, sense and smell. It is mostly seen in reddish-brown but changes color because of special pigment cells in its skin that changes the texture and also helpful in camouflaging.

The flower crab spider commonly seen in the south of the UK is one of the 27 species of crab spider. It will change color of the body to match its surroundings and also helpful in protecting itself from predators. The species is not very common like other crab species and they don’t spin webs to trap insects. A flower crab spider can be easily identified by a globular abdomen which has some spots or lines as well. It mostly appears white and has longer front legs and stronger back legs. Flower crab spider female species is larger than males where females can grow upto 9-11mm and males to 3-4mm.

Also Read: 10 Types Of Spiders In The World

The Arctic fox is the smallest fox of the canine family and also listed as one of the tundra animals in the world. As of now, 5 subspecies of arctic fox are known mostly seen in the Arctic Circle. Arctic fox can be found in Iceland, Greenland, Northern Europe, Russia, Canada and Alaska. It can grow upto 26 inches in length and wieght approximately 6.5 to 17 pounds. The colour changing fox species is bright and snowy white in winters and light brown in summers that helps them blend in with rocks. These seasonal variations help them in camouflaging. Talking about the appearance, it has a rounded body with short legs and small ears. The avarage lifespan of the species is 3 to 6 years in the wild.

Mimic Octopus used to trick predators by mimicking the behaviour of other marine animals such as sea snakes, lionfish, eels, stingrays and jellyfish. This is the primary reason they are called Mimic Octopus and they are small species that can grow upto a length of 2 feet. It is mostly seen in the regions of Southeast Asia, most live off Indonesia’s island of Sulawesi and loves to thrive in warm and muddy waters. The female species die as soon as they give birth to a young one and later young mimic octopuses have to fend for themselves as soon as they hatch. It used to change its color to adapt to its surroundings and they can also take the color off the animal which they want to mimic.

Seahorse is a marine fish and as of now, 35 species of seahorses are known that thrives in the tropical and temperate water all over the world. It prefers to swallow water and hence it can be seen near coral reefs, mangrove forests or seaweed. It is a small species that can grow upto 0.6 to 14 inches in length. Talking about the appearance, it has a horse-like shape of the head along with an elongated body and curled tail. It used to change its body colour to match with its environment and there are few species that used to change body colour under stress conditions or as a part of mating ritual. The avarage lifespan of the species is one and five years both in the wild and in captivity.