Home Nature 10 Most Colorful Birds In The World 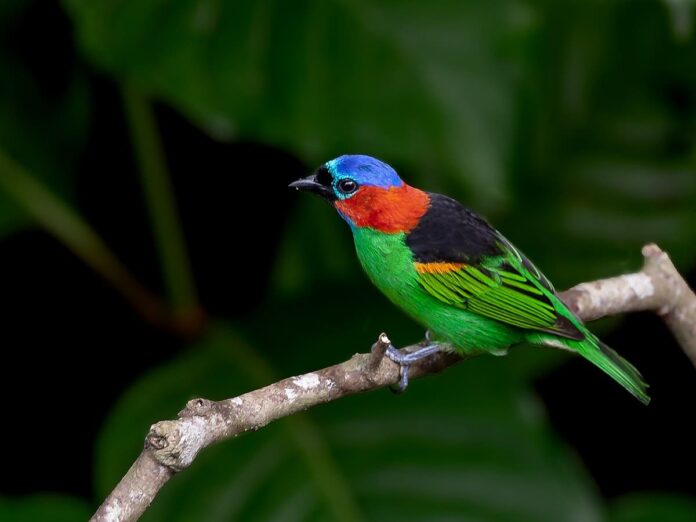 Nature has numerous birds with different varieties, shapes, and features in all different species across the globe. Apart from this, there are types of birds that come with a colourful plumage and they are unique and eye-catching. Even in our daily life we see many colourful birds in our garden or flying high in the sky. Here is the list of most colorful birds in the world,

Red-necked Tanager is considered the most colourful bird in the world which is mostly green and comes with a blue crown and throat along with red cheeks and nape. Male species can be easily identified with a black back and females with duller with a mottled black back. The bird species is native to Eastern and parts of Southern America. It belongs to the family Thraupidaea and mostly seen in the regions of Argentina, Brazil, and Paraguay. It loves to thrive in subtropical or tropical moist lowland forest and heavily degraded former forest. As of now, three species of birds are known that can be differentiated with throat patch and in the details of the colouration of the head.

Mandarin Duck is the most beautiful duck species in the world and native to China and Japan. The bird thrives in the small wooded ponds and generally avoids large bodies of open water. China mandarins are considered as symbols of fidelity and the pair is gifted to the brides on the wedding date. Historically, China exported thousands of mandrins, however, it was banned in 1975. The species has only one genus and it is closely related to the North American wood duck with similar plumage. Talking about the appearance, it has a greenish-black forehead and a purple crest near the back of the head. The sides of the head are creamy white in colour with a chestnut patch below the eyes. It can grow upto 21.0 to 24.5 cm in length and weigh up to 0.63 kg. It used to prey on seeds, acorns, small fruit, insects, snails, and small fish.

Peacock is one of the most colorful birds in the world that belongs to the pheasant family. It is native to Asia and there are two species of peafowl are known namely Indian Peafowl and Green Peafowl. People across the world confuse the word peacock with both male and female birds but peacock is actually a name that refers to male peafowl. The female one is known as a peahen. These are one of the largest flying birds that can grow upto 5 feet and weigh approximately 8-13 pounds. The beautiful and colourful tails are characteristic only for the males and Peahen used to choose its partners with the help of length, width and colouration of the tail. The avarage lifespan of the species is 20 years both in the wild and in captivity. White peacocks are one of the most graceful animals in the world.

Flamingos is one of the beautiful and colorful birds in the world known for its red-purple coloured feather. The bird species thrive in shallow lakes, mangrove swamps and sandy islands of Africa, Asia, America and Europe. As of now, 6 species of flamingos are known that can grow upto 3.3 – 4.6 feet tall and weigh between 3.3 – 9 pounds. The wingspan of the species is 3.3 – 5 feet and the colour of the feather is the result of a diet known as carotenoids and it is responsible for the red and pink colors of their feathers. It used to prey on shrimps, algae and crustaceans and it holds its breath while feeding. The avarage lifespan of the bird species is 20 and 30 years.

Also Read: Top 10 Amazing Birds That Are Blue In Colour

The golden pheasant is also known as the Chinese pheasant or rainbow pheasant that belongs to th family Phasianidae. One of the most colorful birds comes with a golden-yellow bird crest with a light tinge of red at the tip. The whole face, throat, chin and the sides of the neck come in rusty tan colour. Both male and female are of different sizes where male species can grow upto 110 cm and females average 65 cm. It can weigh upto 350 to 700 g and mostly prey on insects, grubs, berries, seeds, and vegetation. The incubation period is for 22 to 23 days and after that, it will lay 8 to 12 eggs with habitat forests in mountainous regions. It is endemic to China but also introduced to the UK where it is in the population of 1,000 to 2,000 individuals. It is also listed as one of the beautiful birds with long tail.

Keel-billed toucan that belongs to the family Ramphastidae with a unique black plumage and a very large multi-coloured bill. It can grow upto 50 cm in length and the large beak length is approximately 20 cm and weighs approximately 400 g. It used to feed on fruit, but will occasionally eat insects, reptiles, birds, and eggs. The bird species can be seen in the regions of Belize, Bolivia, Colombia, Costa Rica, Guatemala, Honduras, Mexico, Nicaragua, Panama, and Venezuela. The bird species thrive in tropical and subtropical rainforests. The incubation period is of 16 to 20 days and fledging duration of 8 to weeks. The avarage lifespan is approximately 20 years in the wild.

Blue jays are one of the best singing birds that can measure upto 9 and 12 inches long and weigh approximately 2.5 and 3.5 ounces. The colourful feather of the bird is due to the internal structure of their feathers. They are also one of the most curious birds that are known to play with bottle caps and aluminium foil. It prepares its nests in the evergreen trees and shrubs 10 to 35 feet off the ground. During the breeding period, It used to form monogamous pairs and then stay for life. It can fly at a speed of 20-25 miles per hour and the main predators are squirrel, cats, crows, snakes, raccoons, possums, hawks, and various raptors and mammals.

Kingfisher is one of the most colorful birds that belong to the kingfisher family. As of now, 87 species of kingfisher are known and they are divided into three groups named kingfishers, tree kingfishers and water kingfishers. The bird species can be seen across the world but prefers tropical areas. It can grow upto 4 to 18 inches in length and 0.33 to 16 ounces of weight. Talking about the appearance, almost all the species are blue or green-coloured with an orange or reddish-coloured chest. It comes with a large head, sturdy body, short legs and stubby tail. They have excellent eyesight that can detect prey very easily above the water when it searches and collects food. The avarage lifespan of Kingfisher is 6 to 10 years. It is also listed as one of the calmest animals in the world.

Wilson’s bird of paradise is a small and exotic bird species that is only seen in the Waigeo and Batanta islands of Indonesia. It used to thrive in the lowland rainforests but it can also survive in mountain forests on the higher altitudes. It can grow upto 6.3 inches in length and 1.8 to 2.2 ounces of weight. Both male and female are of the same size but they are differently coloured and this phenomenon is known as sexual dimorphism. The male one is brightly coloured compared to the females and the male one has blackheads with turquoise crowns ornamented with double black crosses. The lifespan of the species is unknown.

Lilac-Breasted Roller is Kenya’s national bird because of its multiple colors in the feather coat and hence listed as one of the most colorful birds in the world. The total colors are listed as green, white, black, yellow, turquoise, dark blue, reddish-brown, and lilac. In Kenya, these colors are used to represent different tribes that make up Kenya’s community and it depicts the rich biodiversity of the Kenyan region. It used to feed on arthropods and small invertebrates. They are also seen preying on slow-moving lizards, chameleons and snakes. One of the fearless birds swoop down on its prey and if the prey is too big to be eaten, it used to discombobulate it with its wings until it can be eaten.

These are the most colorful birds in the world. Kindly share and do post y our comments.