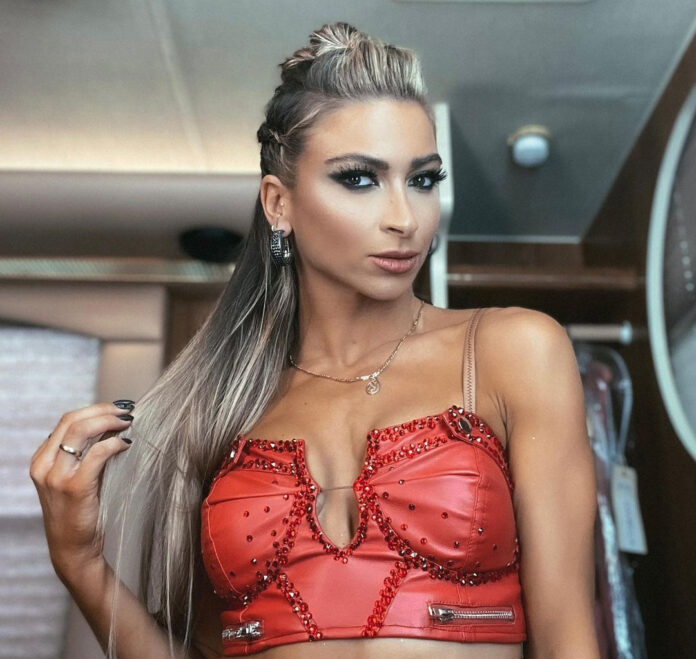 Daniella Karagach, a name that leaves us in awe whenever we hear it! This beautiful young lady has worked hard to earn her fame in the dancing world. She is none other than the famous dancing artist known from “Dancing with the Star”.

Looking back, she has made her fair share of marks in the dancing history with her achievements and won the hearts of many people for her unique beauty and charisma. If you are a fan of her, read this article to know about her personal details.

Who is Daniella Karagach?

Daniella Karagach is an American Dancer and Choreographer, who was born on December 26 in 1992. She was born and grew up in Brooklyn New York raised by a single mother, Regina Yvette Karagach. Right after she turned one, her father Mark Karagach, and her mother divorced each other.

The parents were born in the former Soviet Union of Moldovia, now known as Moldova. She spent most of her life as a single mother’s child, who later married her stepfather Arie Zurinam, and she got a stepsister called Ariana Zurinam. She grew up in Bath Beach and the Forest Hills neighborhood of New York.

At the age of three, Daniella started studying ballet. Upon turning seven, she started taking Latin Dance classes, and when she turned eleven, she formed a partnership with Leonid Juashkovsky to study standard ballroom dancesport.

Even though she was diagnosed with ADHD (Attention Deficit Hyperactivity Disorder), it did not stop her from excelling in school, Franklin D. Roosevelt. Daniella later attended The City University of New York, at the Staten Island College Campus, majoring in childhood education in 2010.

In January 2009, Daniella Karagach paired up with Pasha Pashkov and hit the dance floor. She and Pasha were then seen seven times together at the Latin Champions and The United States 10-Dance Champions. Daniella became the youngest US competitor to hold this title.

Later on, Pasha and Daniella were selected as representatives of the US in 2009 for the World Games held in Taiwan. Both of them made it to the semifinals of the World Championship, which took place in Spain. This enthusiastic pair kept a firm hold on their 2010 and 2011, 10-Dance US Championships, the NDCA, and USA Dance Nationals.

Being an epitome of hard work, Daniella did not stop just there, she kept progressing to the higher and higher levels of accomplishments without stopping. She and Pasha then in June 2011, again made an appearance together and represented the United States at the World 10 Dance Cup in Szombathely, Hungary, and at World Latin Championship held in Singapore in September.

Daniella continued to represent along with her partner Pasha in the World Ballroom Championship held in October 2011 in Moscow, Russia, just like that they also appeared in the Ten Dance World Championship which took place in Shanghai, China in November. During that time, she and her partner won the UK Open Ten Dance Championship, held in London.

Daniella and Pasha made an appearance together at the semi-finals of the Blackpool Dance Festival and during the same time period of 2012 became the US Dance Public Latin Champions. The duo kept on appearing on the visiting shows inspiring the experts and moreover, also appeared in 2015 on Dance Legends.

After a four years relationship, Daniella Karagach and Pasha Pashkov got married on the 18th of June in 2014. In forty years, Pasha and Daniella are the first US couple to be representatives of the US in all four styles at the World Championships (Latin, Ballroom, 10-Dance, and Showdance).

With a tall height of between 5’5ft to 5’7ft, this beautiful, jaw-dropping lady weighs around about 50kg. She was estimated to have a net worth of $900 thousand in 2020 with no children yet. Daniella is the fourth female professional to win the Dancing With the Stars in the second season.

What happened to Danielle from Dancing With the Stars?

In 2022, Daniella had to all of a sudden stop her performance mid-show upon receiving an injury. She got injured while performing on the Dancing With the Stars season 30 held in Riverdale, California.

Who was Danielle dancing with when she got injured?

During the Dancing With the Stars season 30 performance, when Daniella got injured, she was performing with Alan Bersten.

Are Danielle and Pasha together?

Both dance partners started dating each other in 2010, and after 4 years of dating, the couple got married on the 18th of June in 2014. The couple is happily married and together to this day.

Looking at the life story of this charming beauty who leaves her audience mesmerized whenever she makes an appearance, shows how much of a hard-working and talented girl she was. Who did not give up despite her ADHD, and excelled in her field.

Daniella got herself recognized for her determination and now leads a happy life with her spouse Pasha Pashkov.