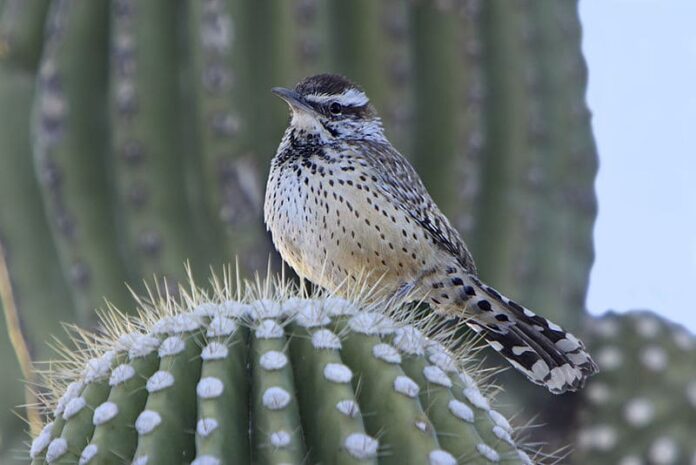 Desert regions have their own unique climate and vegetation characteristics. Summer temperatures rise significantly, making the desert sizzle. There is not a drop of water for miles in many parts of the desert. Yet desert birds manage to thrive in this scorching landscape. They are one of the most resilient creatures inhabiting our planet. Here and there, you may find a Desert Sparrow singing from amidst thorny bushes or a Cactus Wren chirping on the sand. We will discuss desert birds in the world.

Desert birds are adapted with unique features to make them comfortable in the desert environment. They stay in the shade during the day to avoid loss of water due to exhaustion. Their efficient kidneys are developed in such a manner so that they excrete minimum liquid. Most of their water content is obtained from moisture from foods, like fruit, nectar, insects and other prey. Let’s now have a look at various types of birds found in the deserts.

Peregrine Falcon is a powerful mid-sized raptor that can nosedive at incredible speeds to catch its prey. These are birds the size of an adult crow. It can attack birds of prey in mid-flight and catch them. Falcons mostly dwell in the rock cliffs and can spot and chase prey quickly. Falcons have plumes called “flags” on their legs and a well-developed notch in their beaks. Some falcons are known to dice as fast as 200 miles per hour while diving from the sky for prey! 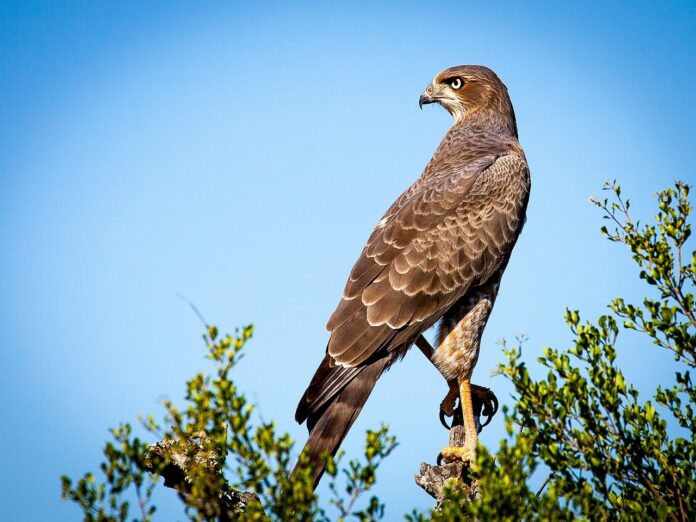 This bird inhabits the desert regions of Central US and the Mexican desert. It is a small bird that mostly dwells on the ground. These birds live in warm deserts and thrive in thorny vegetation. You can easily identify these birds from their forward-bending plumage and top knots of feathers. They can move at great speeds amidst desert bushes and scrubs in search of food. They generally nest around water sources, if available. These birds are fast runners and use the camouflage technique to stay protected from predators. 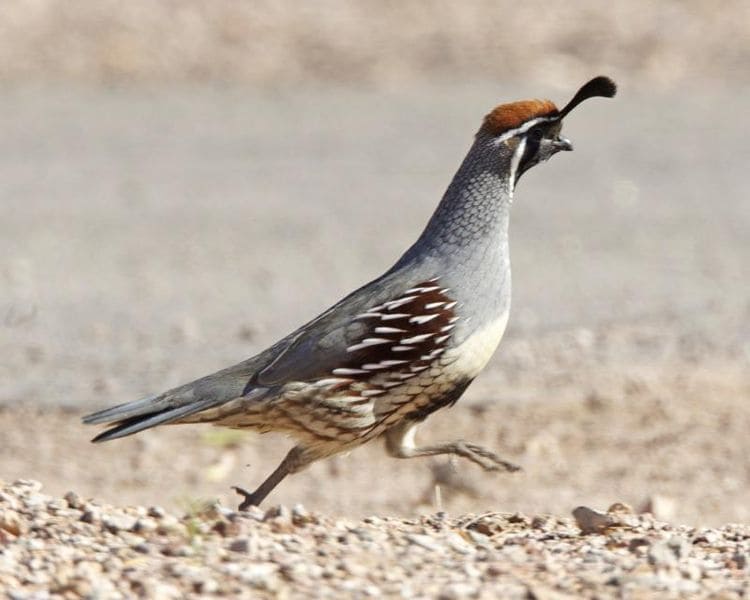 Sand Grouse resemble pigeons but have more pointed tails. These birds inhabit some of the most parched environments on earth. These birds feed on the grounds of the deserts, scrub, and grasslands. These birds have a dense layer of under down that insulates that from extreme temperatures.

They are among the most resilient desert birds that make several long flights daily between their feeding ground and water pools. They are specifically known to collect water for their nestlings using a unique technique called “rocking.” Here, a male grouses visit a water pool and make sideways movements in the water and shakes its feathers continuously in the water. This movement is actually a way to fill water in their feathers, which they take back to their nests.

They have tough coiled hair-like extensions in their belly feathers, which allow them to store up to 25 ml or almost two tablespoons of water. This water can be carried by them back to their chicks in their nest. 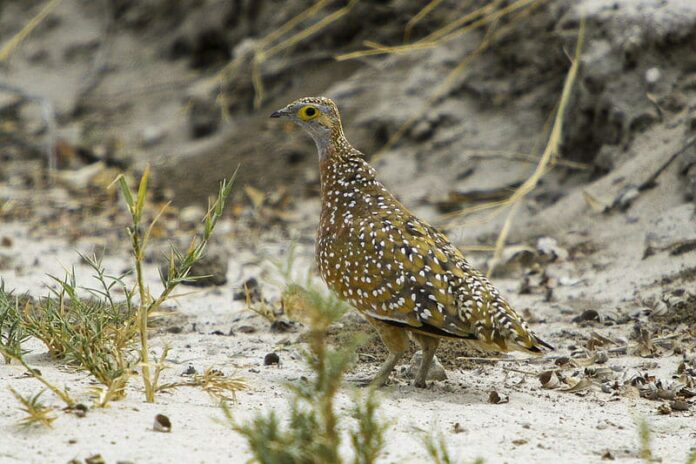 The Desert Lark breeds in deserts and semi-deserts from Morocco to western India, covering the Sahara in Africa, Middle East, Iran and Afghanistan. These are small birds, about 15 cm long, and do not stay in large flocks. They have a big head and a strong bill. Their plumage perfectly matches the colour of the desert soil and is the best example of soil camouflage. These birds generally build their nests in the stony regions of the desert. They are known for their melodious song and soft calls that sound like a flute. 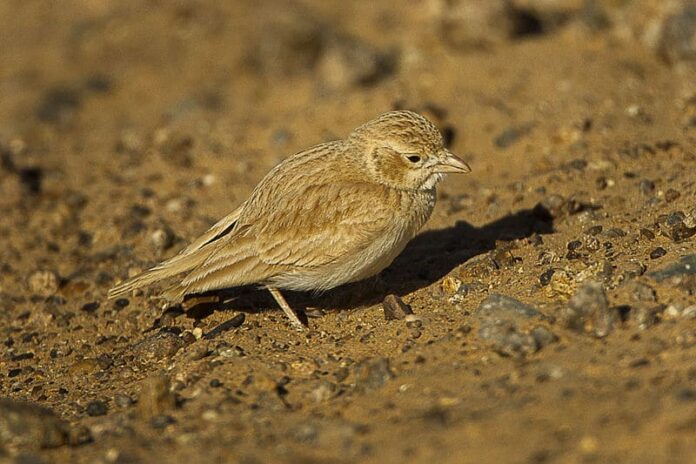 The Greater Roadrunner is a long-legged bird in the cuckoo family that inhabits the Southwestern United States and Mexico. They thrive in the harsh landscapes of the Desert Southwest. These birds can walk and run on the ground, flying only when required. It can run up to 15 miles per hour when chasing prey like a fast-running lizard. At times, they can outrun even humans or kill a rattlesnake.

Roadrunners can measure up to two feet from their bill to white tail tip. They have a bushy blue-black crest with a spotted plumage. Their colors make them that blend well with the desert scrubs. They have a special gland in front of each eye through which they secrete a thick salty solution. This is their method of excreting without releasing much water from their bodies. 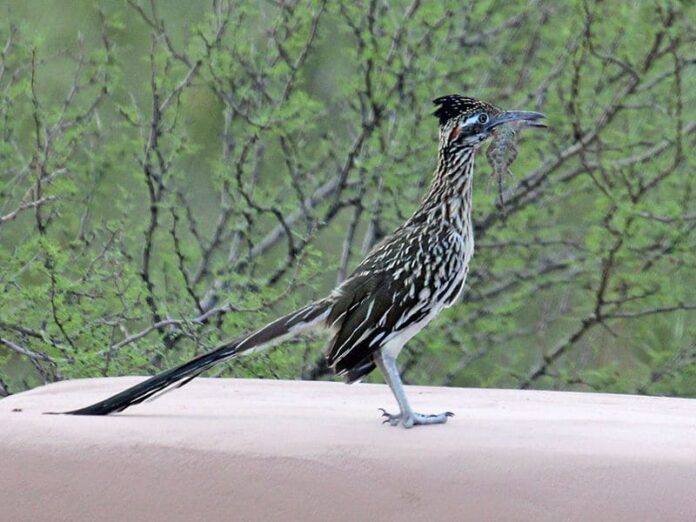 The Burrowing Owl is a small owl with long legs and is found across the dry, open landscapes of Florida, Central America and Mexico.  They hunt during the day and nest and roost in underground burrows, which prairie dogs dig. They sit down on high perches and swoop down as soon as they spot prey. They can even fly up to catch prey in flight. They have thick brown feathers with white spots and yellow eyes. When agitated, it stands erect and abruptly bows down. 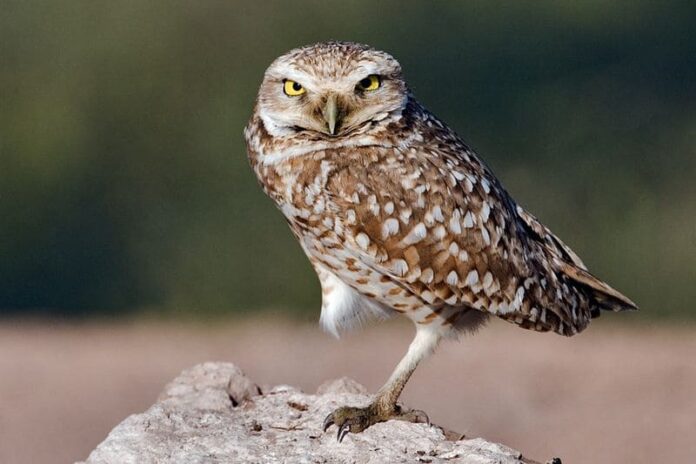 Another adaptive bird of the desert is the Gila woodpecker, which is abundantly found in Southwestern United States’ desert regions in California, Arizona, and Nevada, and Western Mexico. This medium-sized type of woodpecker bird is greyish-brown with black and white spotted wings. You can identify male woodpeckers by the presence of a red patch on their crown. Females have bright red eyes. They are noisy birds that live on giant cactus and feed on insects, fruits, cacti and berries. These desert birds migrate to warms parts of the South USA in winters.

Also Read: 10 Amazing Types Of Yellow Birds In The World 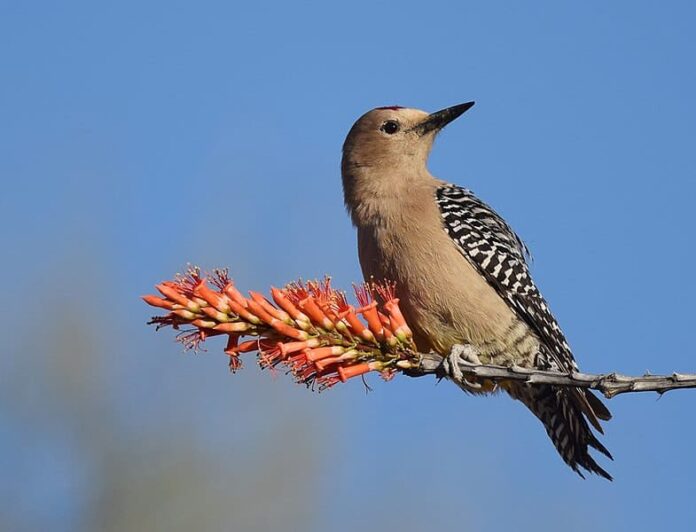 A popular and widely distributed eagle species, Golden Eagles are excellent birds of prey. They are dark brown with a light golden-brown plumage. Their tails and wings have distinct white markings. You can judge its hunting prowess by its powerful talons and beak. It hunts on rabbits, squirrels, and other small animals and can fly swiftly up to 150 miles per hour to catch its prey. They can attack animals much bigger in size than them, like deer and livestock. 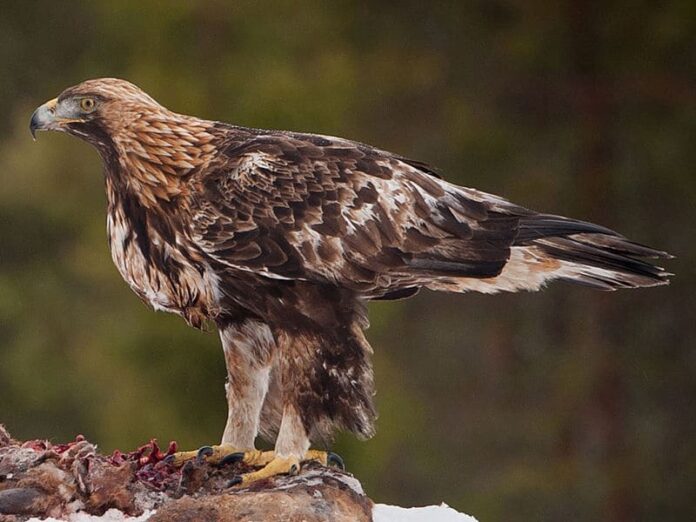 We all know the ostriches as the big flightless birds that inhabit the dry, arid regions of the earth. They roam the African savannahs freely and desert lands. These large birds are strong runners and can run up to 31miles per hour. These birds have long, powerful legs with long, sharp claws.

They can walk in long strides that can cover 10 to 16 feet. They can feed on the scanty desert vegetation and get most of their water from it. They are shy birds that show defensive behaviour. On the sight of predators or when they sense danger, they press their long necks to the ground to act invisible. 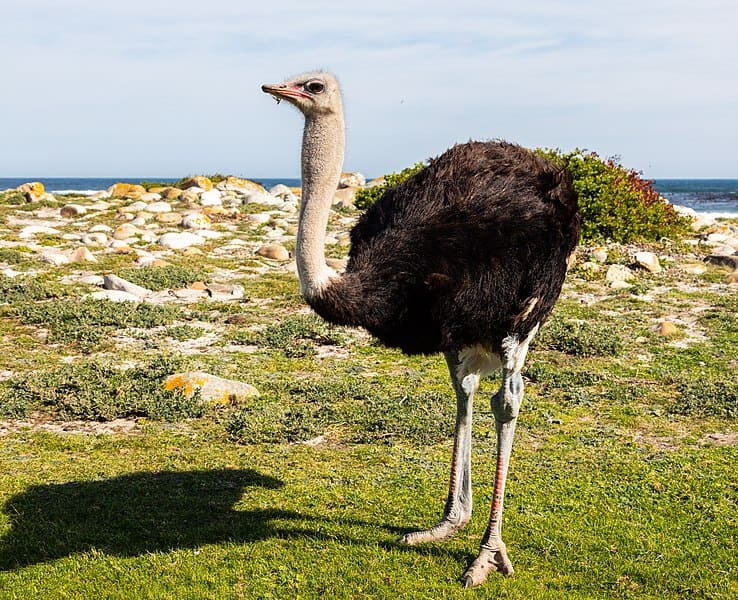 Commonly found in the southwestern deserts of the United States and Mexico, the Cactus Wren is recognized as Arizona’s state bird. These large wrens have brown plumage with black and white spots. They even have distinct white eyebrows that extend to their necks. One can find these birds amidst desert plants and prickly-pear cactus. They are adaptable birds and do not migrate during the cold desert winters. They are known to take sand baths in the desert dust to keep their feathers groomed.

Lucifer Hummingbird is also known as lucifer hummingbird is a medium-sized desert bird that can grow upto 10 cm long. The bird species used to thrive in high-altitude areas of northern Mexico and the southwestern United States. It is mostly seen in the regions of deserts and arid areas with agave plants in the southwestern United States. Talking about the appearance, it has a long curved bill with small wings and a white streak behind its eye. The male can be easily identified with the help of an iridescent plumage whereas the female ones has duller plumage. The bird species mostly feed on desert flowers, spiders and small insects. 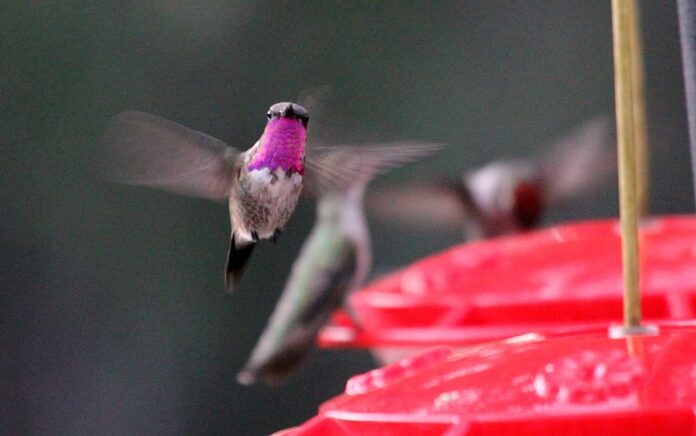 Verdin is the only bird that belongs to the genus Auriparus, howvever, it looks similar to the members of the chickadee family known as Paridae. One of the desert birds built nests for both roosting and breeding. It is a small bird that can grow upto 4.5 in (11 cm) in length. Talking about the appearance, the body is grey overall and the adults has a bright yellow head along with a rufous shoulder patch. They used to feed on in shrub-land and scrubby outcrops where mostly insects are hosted and berries and seeds are plentiful. 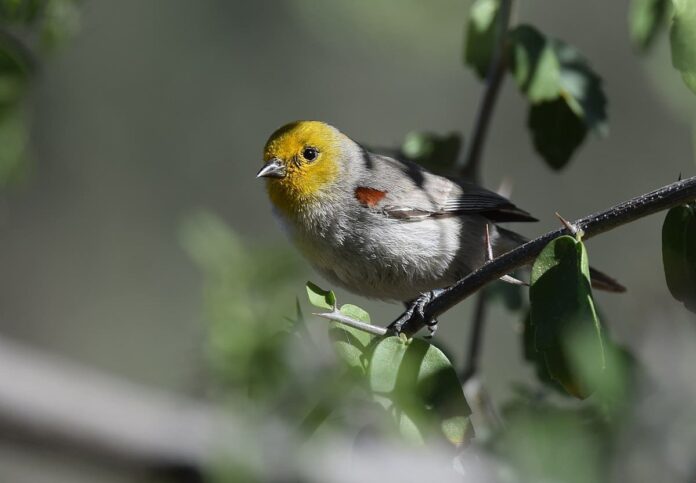 Indigo Bunting is a small bird that belongs to the family Cardinalidae. During the breeding season, it is mostly seen in the regions of southern Canada to northern Florida and during the winters its is mostly seen in the form of southern Florida to northern South America. It can grow upto 11.5–13 cm in length and it is closely related to the lazuli bunting. Talking about the appearance, male species has a vibrant blue in the summer along with brightly coloured plumage during the breeding season to attract a mate, however, it is brown during the winters. Females are brown all year round. The diet usually consists of insects during the summer months and seeds during the winter months. 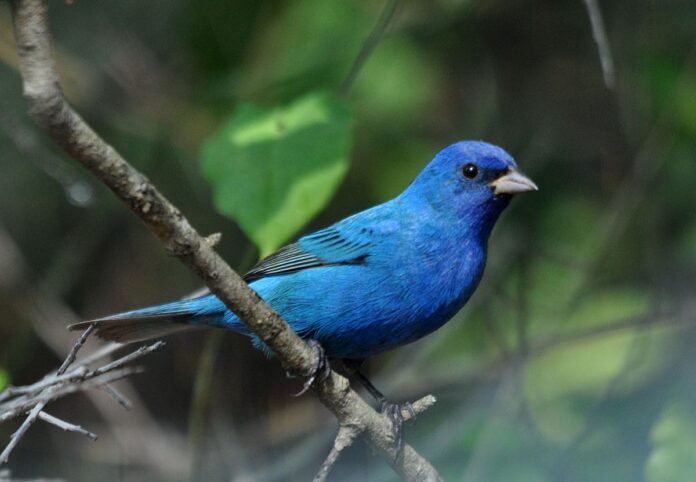 Chinese hwamei knew as melodious laughing thrush is one of the desert birds mostly seen in eastern Asia that belongs to the family Leiothrichidae. The name hwamei comes from China that means “painted eyebrow”.It has a unique distinctive marking around the bird’s eyes. It can grow upto 21 to 25 cm long in length. Talking about the appearance, it has broad with rounded wings and a fan-shaped tail. The plumage of the bird species is reddish-brown in colour along with dark streaks on the crown, back and throat. It will sing a beautiful song and hence it is a popular cage bird. 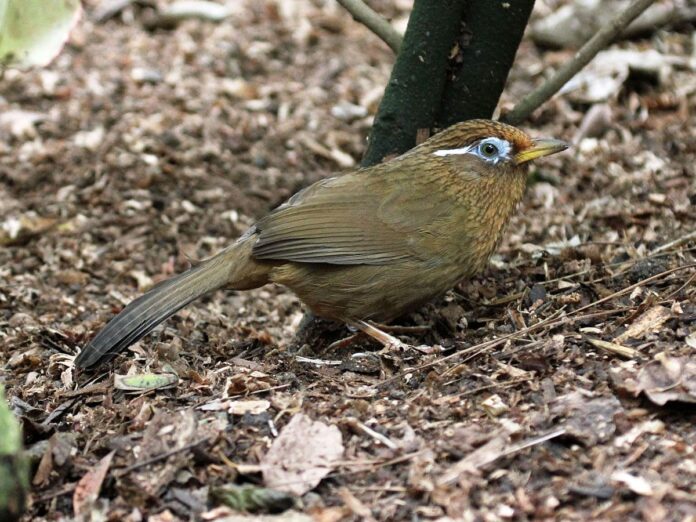 Ferruginous Pygmy-Owl is a small own species that is mostly seen in the regions of south-central Arizona and southern Texas in the United States. It is seen in the wide range of semi-open wooded habitats in these areas. The owl species that belongs to the family Strigidae known as typical owls. It used to prey on a variety of birds, lizards, mammals, and insects. The small owl species can grow upto 15 cm and it used to whistled hoo-hoo-hoo-hoo and can be easily imitated and mostly used by birdwatchers to attract small birds intent on mobbing the pygmy owls. 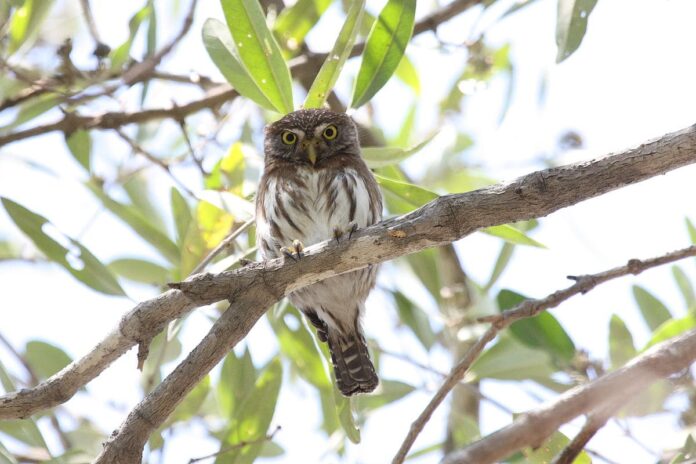 The rosy-faced Lovebird also known as the rosy-collared or peach-faced lovebird is one of the beautiful desert birds mostly seen in the regions of southwestern Africa such as the Namib Desert. These are very social birds and often seen in small groups in the wild. Both male and female has identical plumage. They have a unique form of sleep position in which they sit side-by-side and turn their faces in towards each other. It was initially described by French ornithologist Louis Jean Pierre Vieillot in 1818 and was originally named Psittacus roseicollis but later moved to the genus Agapornis with the other lovebirds. 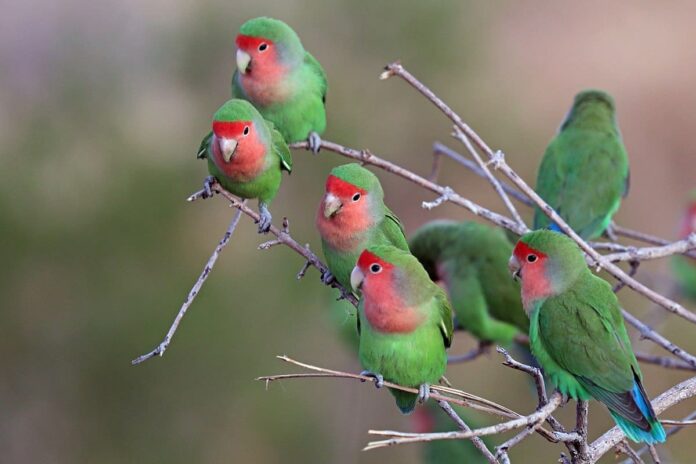 These are the various desert birds that dwell in the harsh climate of the desert regions. They are adaptable and resilient and blend well with the desert surroundings. Some of them migrate from the desert regions to warmer areas during the chilly winters, while others stay put in the deserts alone. These hardy birds can survive on the least amounts of water and set examples of sturdy inhabitants of the desert.