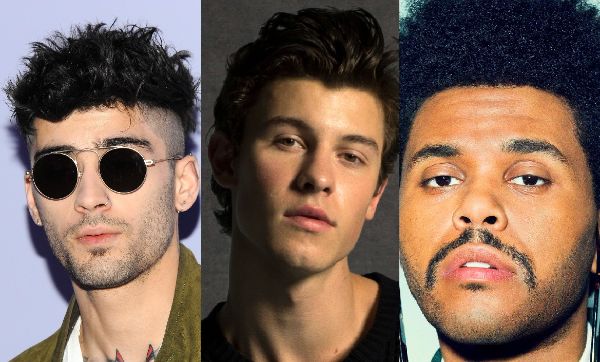 The celebrity world is full of charming stars running around everywhere. The music industry too has no scarcity of charming charismatic singers. Such beauty they possess that thousands of people have a crush on them.

If you’re keeping up with these amazing singers, then I think you should follow the chart that covers the most popular songs on iTunes in real-time. We’ve tried to base this article on all the popular artists who’re ranking there.

So, this list is a 2023 compilation of 10 such male singers who are considered the most handsome. Have fun going through it!

Shawn Mendes is one of the most popular pop artists today. This good-looking young singer wasn’t even 18 when his first album got first place at Billboard 200. Such a young talent only expanded his popularity with time. Songs like “Treat You Better,” “There’s Nothing Holdin’ Me Back,” “Señorita” have garnered billions of views on YouTube and other platforms.

Born in Ontario, Canada, Shawn’s journey to the musical world was a bit surprising. He first came to attention through his vines. The next year he got his first label and now he has won 3 SOCAN awards, 10 MTV Europe Music Awards, eight Juno Awards. The sky’s the limit for Shawn.

Justin Bieber is another youngest and one of the most popular pop artists in the world right now. He has been singing for more than a decade now, starting even before he became a teenager. Scooter Braun, his manager, found Justin in the year 2008 when he was only 14. He was then singing in small gatherings and small local competitions.

People like Braun knew, what a gold Justin Bieber was. While bidding for the young talent, Usher signed him defeating Justin Timberlake, who also wanted him. Every music fan knows what happened next. JB became one of the highest record-selling musicians, the youngest solo musician to rank seven back-to-back number one albums in the US. Forbes and Times often include him in the list of most influential celebrities.

R&B star The Weeknd was a surprise entry in the genre of pop. He started with first releasing anonymous videos on YouTube. In around 2011, he came to light due to his release of “House of Balloons,” ‘Thursday,” and “Echoes of Silence.” These were his first mixtapes that people really listened to and wondered about the mysterious singer.

Originally named Abel Makkonen Tesfaye, the stunning Canadian singer might haven’t realized that it was a life-changing decision to publish those mixtape songs. Because what happened after was a fairy tale. His improvised dark R&B got the attention of not only listeners but also critics and large publications. The Weeknd got his label the very next year. Today, after almost a decade, he is a handsome mega artist with three Grammy Awards, five American Music Awards, nine Billboard Music Awards, and the list goes on.

Who doesn’t know Bruno Mars! The cool-looking dude who created beautiful songs like “Just the Way You Are”, “Grenade” and so many more. He is on the Wikipedia list of one of the best-selling music artists of all time with 130 million records sold worldwide.

Mars started pursuing music a long time ago at the very beginning of the 2000s. Originally from Hawaii, he moved to the US to build his career around music. But it wasn’t until 2010 when he tasted his first success with the song “Nothin’ on You.” Wonders started happening from here, he released seven singles at the top of Billboard Hot 100, snatched second place after Elvis Presly to get the fastest five of them.

This charming fella, Bruno has so far won 11 Grammy awards and hundreds of others. In a recent report, he has an estimated net worth of $175 million.

The most famous of the Jonas brothers, and obviously the most handsome one — Nick has been in the industry for quite a long period. Mainly dealing with pop and pop-rock, he has gathered a following. Nick’s first single came at the age of 10, the Columbia Records got in touch with him inspiring them to form a band named “Jonas Brothers.”

Before breaking up, the band released three albums — all of them commercially successful. This charming singer also appeared in the movie series Jumanji with The Rock and Kevin Hart. The 10th Sexiest Men Alive according to People magazines became huge news when he married the Bollywood star, Priyanka Chopra.

Charlie Puth is known for the very specific style of pop music that he has created over the years. His songs “We Don’t Talk Anymore,” “Attention” established him in the market for the jewel he is. Charlie first came to global platforms when his song “See You Again”, which was a tribute to the great Paul Walker got the first position in US Billboard Hot 100.

After the success and such appreciation from a large number of listeners, Charlie released his first album Nine Track Mind. But things got messy, the album disgustingly backfired, however, he recovered it with a couple of singles. Although the cute singer hasn’t yet got a Grammy, but I’m sure he’ll get a bunch of them pretty soon.

Zayn wasn’t a familiar name in the music world until he achieved something that no one ever did before he became the first English musician to peak at both the UK and US with his first album. The singer from a little-known boy band collaborated with Taylor Swift and Sia on an international platform to become one of the most sought-after artists of our time.

His charisma and bold personality made him the heartthrob of thousands of fans, especially women. From his debut album Mind of Mine in 2016 to the latest release, Zayn has won various awards and honors in the music industry including the American Music Award and an MTV Video Music Award. He has got around 40M followers on Instagram, even more than Ed Sheeran’s, so you can imagine his craze.

If you have been following the TikTok trends, you know how popular the song “Savage Love” was when it got viral. The singer behind it was Jason Derulo. He released the song in June, soon after it went viral, BTS remixed the song and it became number one in the US.

Jason has been in the industry for more than a decade and sold around 30 million in records globally. Although he hasn’t won a Grammy or AMA, his songs have influenced millions of people. This handsome singer is working on his next songs. So, if you aren’t yet familiar with Jason, I recommend listening to him.

If you have ever listened to the album I Met You When I Was 18, you know Lauv. Because this album made him famous in 2018. Although a compilation, it was a huge success in drawing people’s attention to the songs and therefore falling in love with the beautiful Lauv’s work.

He released his debut album in 2023 — How I’m Feeling. The Billboard 200 chart placed him in the 16th position. So yeah, the official beginning of his career is from here. But, other than being a singer, he also a songwriter writing for prominent stars such as Celine Dion.

Celine’s “imperfections” is written by Lauv, he also wrote the song “No Promises” by Cheat Codes and Demi Lovato.

Chris is one of the most popular musicians in the US. Ever since his debut album came into the market, people have fallen in love with him. Not to bore you with numbers, but he has sold 140 million or more records around the globe. A career spanning over almost two decades, the charismatic singer is yet to reach his saturation point.

A Grammy Award, 15 BET Awards, four Billboard Music Awards, and six Soul Train Music Awards, and counting — his achievements grow day by day. However, he is not blameless- in a legal accusation, the court charged him guilty for assaulting his then partner Rihanna.