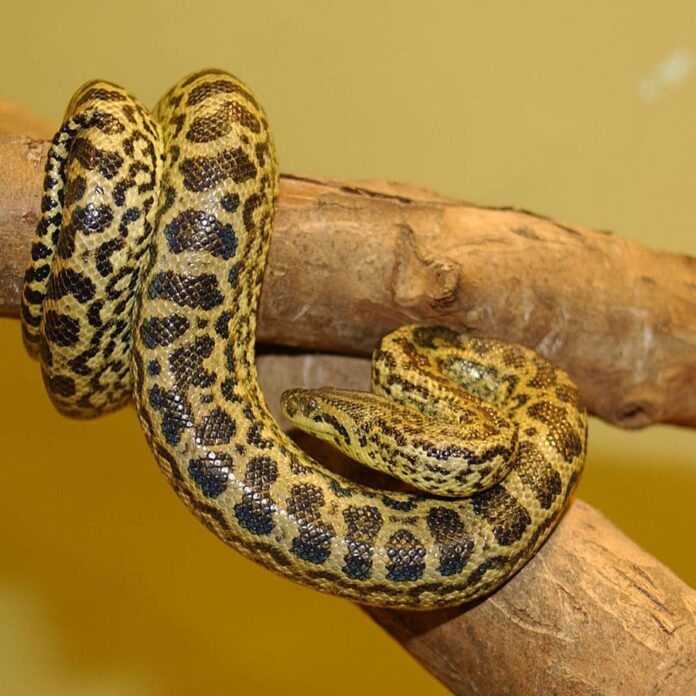 Snakes give birth in two different ways, one is by laying eggs and another one by giving birth just like mammals. About 70% of the snakes lay eggs and 30% of them give birth to a young one. Snakes are carnivores and they only eat meat. Almost all people believe that snakes kill the prey by biting and then injecting it with poison, howvever, this is not true for all snake species in the world. The largest living snakes are measured either by length or by weight and mostly belong to the members of the Boidae and Pythonidae families. Here is the list of biggest snakes in the world,

Biggest Snakes In The World

The green anaconda is the biggest snake in the world native to South America and thrives in swamps, marshes and streams. The size of the green anaconda help them to swim freely in water, however, they are slow on land. Talking about the appearance, they have eyes and nostrils are on the top of their head allowing them to see and breathe. The rest of the body is inside the water. The snake species spent most of the time inside the water and hunt inside the water by using sight, smell and the ability to sense heat emitted by potential prey. It generally preys on fish, birds, tapirs, wild pigs, capybaras, and caimans (reptiles similar to alligators). It spent most of the time alone but during the month of April and May, males seek out females for the opportunity to mate.

Burmese Python is also known as Asiatic rock python or tiger python is also one of the biggest snakes in the world. The snake species is a subspecies of Python molurus that can be seen throughout Southeast Asia, from Pakistan to Indonesia. Talking about the appearance, It has a dark brown with beige blotches along with two distinct lines that and loves to feed on large food items such as pigs and deer. The avarage lifespan of Burmese Python is 20 years and the longest living in captivity is 28 years, 3 months. It thrives in areas that include dry forest, mountain, and open grasslands of Southeast Asia.

The reticulated python is mostly seen in the areas of coastal Southeast Asia, including the Philippines, Indonesia, Burma, and Vietnam. It used to feed on mammals such as small a rat and as large as an antelope. Talking about the appearance, it has a large tan-brown body with dark and hourglass-shaped markings that can help them in camouflaging especially in the natural habitat. It is a nocturnal species that is most active at the night and kill its prey by constriction. It coils around their prey and continuously tighten their hold to slowly suffocate the prey.

The non-venomous snake species feed on especially medium-sized mammals, birds and even bats. It is also seen that larger python preys on warthogs, bushbucks and even crocodiles, swallowing them whole. It is the largest species of snake in Africa and thrives in grasslands and savanna near water and occasionally in forest edges in sub-Saharan Africa. It is highly dependent on water and mostly submerges itself near the banks of a stream and wait for its prey. It has been seen generally as its prey on small rodents and birds.

Indian pythons are one of the largest snakes in the world and mostly seen in the regions of India, Pakistan, Sri Lanka, and Nepal. It is seen in a variety of habitats including rainforests, river valleys, woodlands, scrublands, grassy marshes, and semi rocky foothills. It is also a nocturnal snake species that hunt at night using both a combination of heat sensors and chemical receptors to pinpoint and identify target animals. It generally preys on birds or small mammals by grabbing the animal and holding it with sharp teeth.

Amethystine (scrub) python is a species of nonvenomous snake and it is one of the biggest snakes in the world. This is also listed as the largest native snake in Australia and Papua New Guinea. It is mostly seen in the regions of Australia, Indonesia and Papua New Guinea. It is a solitary nocturnal creature where young ones love to spend most of the time in trees and adults are more terrestrial and spend their time mainly on the ground. The carnivores snakes species diet includes birds, bats, rats, possums, and other small mammals. Pythons are also one of the types of snakes in the world.

Yellow anaconda is a non-venomous boa species mostly seen in southern South America. One of the largest snakes in the world is visible in different colour patterns such as yellow, golden-tan or greenish-yellow ground colour along with black or dark brown saddles and streaks. Female ones are larger than males and can be easily identified in Bolivia, Paraguay, Brazil, Argentina and Uruguay. Just like the Amethystine (scrub) python, it is also a solitary snake that is active in day and night both. The avarage lifespan of species in the wild is 15 to 23 years. The diest includes mostly aquatic or semi-aquatic species, including a wide variety of mammals, birds, reptiles, amphibians, fish, and eggs.

Boa constrictors are one of the most famous snake species with more than 40 species of boas that are seen in deserts, tropical forests, and savannas from Mexico to Argentina. Almost all Boas are constrictors that belong to the nonvenomous members of the family Boidae. It is one of the 30% of the snake species that give birth to a live baby. They do not have ears instead of strong senses that can help them understand acute vibration sensitivity. It is mostly seen in the regions of tropical climates throughout most of Central and South America and mostly hunts at the night. Mother boas give birth to about 60 babies at a time.

Also Read: Top 10 Most Beautiful Snakes In The World

Cuban boa is one of the largest snake species of boa also listed as one of the biggest snakes in the world. Though they have poor eyesight they mostly rely on their tongues to smell the air. The carnivores snake species loves to feed on small mammals including rodents. The endangered species mostly seen in tropical dry forest and scrub forest. The biggest snake in the world seen on the island of Cuba mostly seen in the holes and rock piles and on cultivated land.