Home Nature A List of World’s Largest Eagles Based On Mass, Length And Wingspan 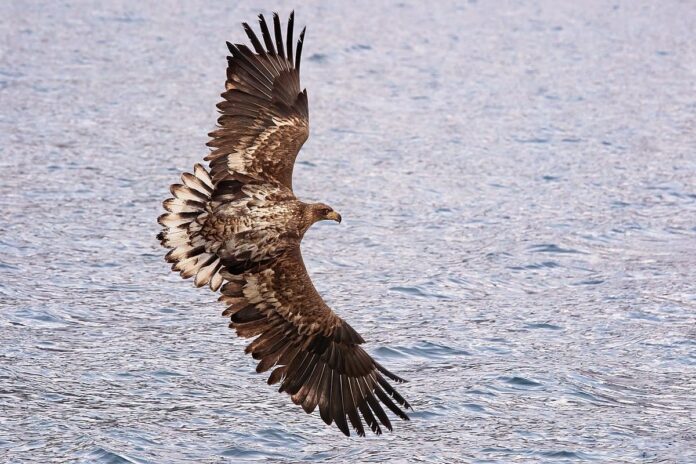 Eagles are one of the largest birds in the world that belongs to the family of diurnal birds of prey. As of now, a total of 60 species of eagles is known in the world except in New Zealand and Antarctica. Eagles are strong birds that can survive in mountains, canyons, forests, open plains and areas near the water. The primary threats eagles are facing in the form of habitat destruction, pollution of the soil and water and hunting. The government authorities across the world are taking all required steps to conserve the endangered species of eagle especially the Bald eagle. Our list of largest eagles in the world is based on three factors that are in total length, body mass and Wingspan. We will first list out largest eagles in the world based on largest Wingspan,

Largest Eagles In The World

The white-Tailed Eagle is the largest eagle in the world based on wingspan mostly seen in Greenland and Iceland across to as far east as Hokkaido, Japan, they are often scarce and very spottily distributed as a nesting species, mainly due to human activities. It is also known as the white-tailed sea-eagle ad sometimes even known as grey sea eagle or Eurasian sea eagle. One of the apex predators in the world loves to thrive near large bodies of open water that includes both coastal saltwater areas and inland freshwater.

Stellar Sea Eagle is the second largest eagle in the world with a wingspan of 250 cm or 8ft 2in. It was originally described by Peter Simon Pallas in 1811. Talking about the appearance, it has a dark brown plumage with white wings and tail. The eagle species has a unique yellow beak and talons. It is mostly seen in the areas of coastal northeastern Asia and preys on fish and water birds. The name of the eagle species comes from the Ancient Greek logos “the open sea/ocean”.

Golden Eagle is one of the biggest eagles in the world in the Northern Hemisphere. Talking about the appearance, the species is dark brown with lighter golden-brown plumage on their napes. The territories of the species are as long as 200 km2 (77 sq mi). It used to build large nests in cliffs and other high places to which they may return for several breeding years. The breeding season of Golden eagles is in spring and the two eagle species will remain together for several life or even for life.

Also Read: Top 10 Most Graceful Animals In The World

The martial eagle is one of the biggest eagles in the world native to sub-Saharan Africa. It is also listed as one of the most powerful eagles in the world and main preys on mammals, birds and reptiles. The hunting skills of the species is unique where it mainly hunts from a high soar, by stooping on its quarry. Out of all eagle species, it is one of the most persecuted bird species in the world because of its habit of falling into livestock, so local farmers and want to eliminate martial eagles. The species is endangered by the International Union for Conservation of Nature.

Here is the list of biggest eagles in the world based on total length,

The Philippine eagle is also known as the monkey-eating eagle or great Philippine eagle mostly seen in the forests of the Philippines. Talking about the appearance, it has a brown and white-coloured plumage along with a shaggy crest. This is the largest extant eagles in the world in terms of length and wing surface. It is also listed as the Philippine national bird and the sad part is that it is critically endangered according to the International Union for Conservation of Nature.

Wedge Tailed Eagles are native to the Australian region and can be seen throughout the continent that starts from the tropical Top End to Tasmania. It used to prepare large nests or we can say very large nests and prefer tall trees that are common in the healthy mature forests Australia-wide. The species mate for life during the breeding season and share the duties of caring for their chicks and maintaining their nests.

Stellar Sea Eagle scientifically known as Haliaeetus pelagicus is one of the largest eagles in the world that used to breed only in far eastern Russia along with areas of coasts and surrounding islands of the Sea of Okhotsk and the Bering Sea. They are most commonly seen on the Kamchatka Peninsula. It used to migrate from their breeding grounds to Japan and can also reach Korea or even farther distance. It used to mainly feed on salmon and it both hunt and even scavenge for this resource.

Crowned Eagle is also known as the African crowned eagle or the crowned hawk-eagle mostly seen in sub-Saharan Africa. The eagle species likes to thrive in riparian woodlands and various forests. The 90% diet of the eagle species in mammalian and preys on rock hyrax and small primates such as monkeys.[6] Birds and large lizards are barely taken.

Here is the list of largest eagles in the world based on body mass,

Stellar Sea Eagle is the heaviest eagle in the world where male species can weight approximately 4.9 to 6 Kg and male one around 6.2 to 9.5 Kg. Talking about the appearance, Steller’s Sea Eagles are mostly black to dark brown in colour and have distinctive white feathers on their shoulders, legs, tail and crown.

Philippine eagles is also one of the largest eagles in the world based on mass. The avarage lifespan of the eagle species is up to 60 years of age. The full-grown female species is known as ‘Thor’ (after the Norse God of Thunder). Females, are larger than males and has clearer eyesight than humans.

Harpy Eagle was mostly seen in Mexico, Central and South America. The diest of the species includes tree-dwelling mammals (sloths, monkeys, squirrels), birds, iguanas, snakes. The species is known for its huge black and grey raptor with massive claws. It is also seen in the Ecuador Amazon rainforests. It is used to prefer tall trees for nests and construct its nests with the help of sticks and branches as well as plants and animal fur. It also used its nests over and over again by using the same materials.

White-Tailed Eagle was mostly seen in the regions of Lofoten, Fair Isle, Greenland and North Norway. The diet of the eagle species depends on the location where it is thriving. There are instances where it will snatch food from other birds and otters. These are excellent fishers who are master in snatching fish near the surface of the water. It can fly upto a speed of 70km per hour.

Martial Eagle is classified as vulnerable on the IUCN list and it is listed as Africa’s largest eagle with a wingspan of 2.6 metres. The unique part is that they hunt silently and secretively.

These are the largest eagles in the world based on total length, body mass and Wingspan. Kindly share and do post your comments.