Home News A Newly Found ‘Super’ Earth Only Takes 2.4 Days To Complete A... 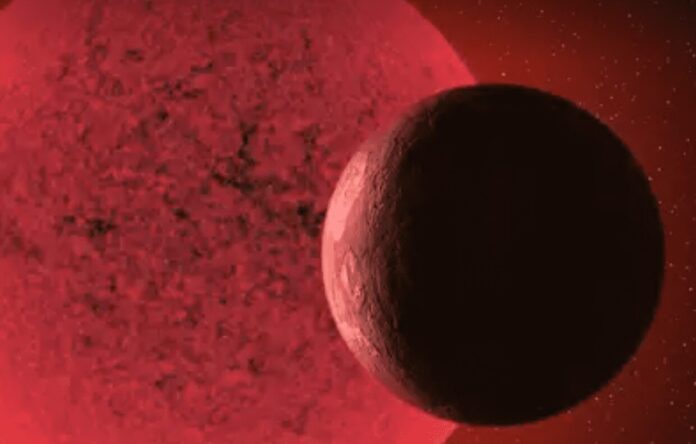 Astronomers are working day and night to find life on another planet may seem like a dream that’s far away, but astronomers are already on the hunt for the next new candidate. And they seem to have found one 36 light-years away. A student who is working in a research institute in the Canary Islands at the Instituto de Astrofisica de Canarias has uncovered a new super-Earth orbiting the star GJ 740, a red dwarf. It only takes 2.4 days to complete one orbit around its star.

Talking in more detail, where Earth takes 365.25 days to complete a year, this new super-Earth does in less than a week it will do it in two days, nine hours and thirty minutes to be precise. Acording to the report published in Astronomy & Astrophysics, “This is the planet with the second shortest orbital period around this type of star,” said Borja Toledo Padron who is the first author of the report.

The study is part of the project HADES (HArps-n red Dwarf Exoplanet Survey), in which the IAC is collaborating with the Institut de Ciències de l’Espai (IEEC-CSIC) of Catalonia, and the Italian programme GAPS (Global Architecture of Planetary Systems), whose objective is the detection and characterization of exoplanets round cool stars, in which are being used HARPS-N, on the Telescopio Nazionale Galileo (TNG) at the Roque de los Muchachos Observatory (Garafía, La Palma).

Now, you all thinking, What is a ‘super’ Earth?, It is called a Super Earth because of its massive size and super Earths are at least twice the size of our planet and up to 10 times its mass. They’re also lighter than the solar system’s ice giants, Neptune and Uranus. But they don’t necessarily have to be made up of rocks. They can also be made up of gas or a combination of both. As per teh study, this super Earth around GJ 740 has three times the mass of the Earth and a little smaller than Neptune, the fourth largest planet in our solar system after Jupiter, Saturn and Uranus.

Now the next question arises that Are super-Earths next to red dwarfs habitable?, So, Astronomers come to a conclusion that comes across red dwarfs a lot because they’re a dime a dozen within the Milky Way. Some studies estimate that red dwarfs make up three-quarters of the stars in the galaxy. Red dwarfs are also called the ‘cool’ stars of the universe. They are the smallest in size and have the lowest temperatures.

The problem with being cooler is that the ‘habitable zone’ around the star is much smaller. And, the closer a planet is to the red dwarfs, the higher the chance of tidal locking. This when the planet rotates at the same speed as its star. As a result, one side always faces the star and gets boiling hot, and it’s always night on the other side so the temperatures are freezing.
However, having an atmosphere like Earth or Venus can level out these temperature differences. In 2013, simulations showed the atmosphere around red dwarfs would be conducive to life under the right conditions. The sun would appear a lot bigger and there may be black plants instead of green — but humans would survive.