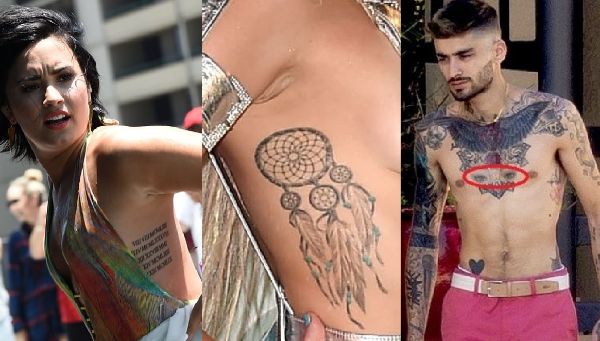 Tattoo or body ink is a specific form of expression that has become popular for a long time now. People generally like to express their views and life experience and ideologies through these body arts.

Pop stars and other celebrities have actively done that in so many cases. This article talks about the 10 pop stars who have meaningful and beautiful tattoos. If you’re a tattoo lover you’ll surely enjoy it, if you aren’t — you might fall in love with the art.

The pop star and one of the most popular celebrities in the world are attached to his tattoos. He has so many of them, that it is almost impossible to see any of his body parts without ink. In attempts to understand some of them, we found these:

Around his stomach, there is a huge tattoo of an Eagle. Although Justin has referred to it as a big mustache, it could be possible that he is expressing his gratitude to America. Despite being a Canadian, the Americans treat him like one of their own. If that is so, then it’s very cool and humble of him!

The extremely deep and meaningful eye on his hand also has a deep meaning. It symbolizes his mother Pattie Mallette and her love and affection towards him. JB believes that his mum always looks over him, no matter wherever he is.

The musical superstar Miley Cyrus is a famous tattoo lover. She is known for her 20 tattoos all over her body. The most interesting ones that seemed to me were the one in her right ear and the other one is one her right ribs.

The ink on her ear says the word ‘love.’ It is actually a fantastic symbolism that we see in work. The word symbolizes filtered intake of external elements — in this case, only positive words, emotions, affectionate exchanges.

The second tattoo on her right ribcage is of a dreamcatcher. Dreamcatcher is a symbol in various cultures. The Native American culture believes that they protect people in their sleep, fighting bad dreams. To Miley, it’s a sign of her siblings being protected from outside threats.

Dua Lipa is another body art enthusiast in the industry and has painted so many cool tattoos on her body. Some of them are extremely beautiful and could be your next tattoo idea.

She has ink of a palm tree on her upper portion of the left hand. Her strong attachment to Los Angeles is portrayed through this. Dua wanted to pay tribute to the place that has so meaning to her life and career — this was the way she chose.

Another one is on the same hand but is on the lower front side. It’s a simple three-word sentence, it says ‘THIS MEANS NOTHING.’ To think of it, it could mean anything, she is not necessarily talking about the tattoo. Think.

The roaring musician with millions of followers has often turned to tattoos to express herself. While looking into details, it was mesmerizing to know the fact that she is so much more than just a celebrity.

On her right inner bicep, the words ‘Anuugacchati Pravaha’ are written in Sanskrit, one of the oldest languages in the world. It means “Go with the flow.” Indeed, we should follow such words.

Other than that, Katty inked a cute little smiling strawberry on her left ankle. It is so beautiful to see such refreshing body arts that it makes you fall more in love with her.

The popstar has literally lost count of her tattoos, she once said in an interview. So good luck counting them. However, we did find out some interesting information about the inks she has all over her body.

The ink of the lion that she has on her left hand is obviously a symbol of power and strength. It is also attached to her song “Lionheart,” which is about a brave and strong heart as well. You need a lot of courage to keep going and be someone you dream about every day — Demi is a living example of that.

Her left side ribcage consists of five Roman numbers serially. Each of these dates is very close to Demi’s heart as they are the birthdays of her family numbers. For example, VIII VIII MCMLXII is 8-8-1962; it’s her mother’s birthday.

Shawn Mendes is on an upward pace in his career for the last few years and we wish him the very best. The young singer has also quite the taste for tattoos. You might have seen some of those in his videos, there are more.

The tattoo that struck me the most is the butterfly on his right arm. It’s a combination of butterfly wings and flowers. Such beautiful artwork was actually inspired by real-life as Shawn saw a fanmade photo of his with that tattoo. It impressed him so much that he decided to paint it in real life.

Another wicked ink is on his right arm, it’s an abstract paint of a guitar. It is normal for a musician to tattoo an instrument, but it becomes more special when you get to know that the handle portion of the guitar is actually the Toronto skyline, while the body of it is a wavelength of his parents saying “I Love You”.

Even if you don’t follow pop so closely, you have heard of Zayn Malik, the sexy and charming singer from England. He is a massive tattoo enthusiast as well. Much like Justin Bieber, his whole body is covered with ink.

The sweetest one that I found was on his chaste, as he had painted the eyes of Gigi Hadid, his girlfriend, and mother of his daughter. They have been on a tumbling road for a long time but seems like the tattoo signifies their strong bond.

Another interesting work and a show of strength is his tattoo of a gun tucked into his waist. This is something that many people see as a bold, ‘manly’ move. Whatever it is, it’s certainly very creative to think of something like that.

Ariana has a lot of tiny little tattoos all over her body commemorating several special moments, people, or things that she loves. It is intriguing to see someone who bears so many signs on her body as if it’s loaded with memory.

Her first tattoo was in 2012 when she painted the love sign on her toe. Although it’s very small and probably invisible, it worthy to be mentioned as it was the start of a long journey.

Ariana has a tattoo on her midriff region of a large plant. Such an ink could mean so many things — interpreting from her own words, it’s a sign of evolution. People grow and evolve with time.

Lady Gaga is one of the most popular female singers in the world, sitting right beside Shakira, Beyonce, and so many others. Besides singing, she absolutely loves tattoos and has numerous of them all around her body.

To name a few, Gaga has inked a whole paragraph by a German author. It said, ”Confess to yourself in the deepest hour of the night whether you would have to die if you were forbidden to write. Dig deep into your heart, where the answer spreads its roots in your being, and ask yourself solemnly, Must I write?”

Gaga also has a trumpet on her right hand. It was actually in honor of Tony Bennett, who gifted her the picture in the first place.

Yet another musician, completely in love with body ink, Halsey has some great tattoos to show us. One of them is on her neck that says — ‘I’m a loser baby.’ A popular song from the ‘90s, the lyrics might have extremely impressed her.

But the best one is near her left ear, it’s a Queen of Diamond. Such ink is obviously a strong message of power and dominance to other people. Painted by the artist Nal, it has to be one of the most innovative and creative tattoos one has ever seen.