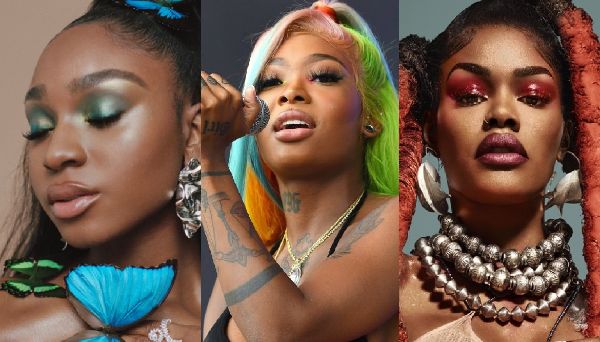 Notwithstanding the intense competition among talented and ambitious artists in the music industry today, women entertainers, especially black women have been at the forefront of the best accomplishments. In this list, we’re checking the top 15 most popular black female singers to listen to in 2023.

These 15 names are not on a basis of talent, instead, it’s on popularity and their current performances. So yeah, feel free to check their latest releases, some of them own the Grammy this year.

LA-born Rapper and Singer, Doja Cat has been around for quite a while, right from her teenage years as a creator on Soundcloud. However, Doja Cat is more popular for her 2018 viral music video hit, “Mooo!”, with over 90 million views on YouTube. This gave her music career a sporadic shift and gave her wider visibility for her talent in music.

Since her sky-high hit, the singer has continued to show up with hits like her “Say So”single from her Hot Pink album, which had made the singer her first No. 1 on the  Billboard’s Rhythmic and Dance/Mix Show Airplay charts. It is no surprise that her latest album, Planet Her has earned her more accolades, as every single track on the album made to the Billboard chart.

With more artistic works like her other big hits like “Streets”, “Boss Bitch”, “Cyber Sex” and more, her career growth is quite an impressive one to see. It is undeniable that Doja Cat will continue to dominate the global music scene like other talented black female singers.

Multiple Grammy Award-winning singer, Mega Jovon Ruth Pete, better known as Megan Thee Stallion is next on the list. Among all the excellent music performances that this artist is known for, her Houston Rooftop Cypher is still very fresh. This is no doubt because it introduced the confidence exuding woman with powerful standing and lyrics that Megan is, to the world.

Following her debut single, “Like a Stallion” in 2016, Megan has remained at the top of her game with her outstanding hits like “Savage” remix with Beyonce which earned the singer her very first No. 1 billboard topper on the Hot 100 list. Her tenacity and brilliant lyrical verses are features that cannot be missed in her outstanding music.

Despite juggling her career with being a student at Texas Southern University, studying to bag a degree in Health Administration, the “Hot Girl Summer” crooner has been able to pull off giant strides in her career like when she became the first rapper to sign with 300 Entertainment.

Solána Imani Rowe, the singer, and songwriter professionally known as SZA is one of the women of color that makes the list too. The black-skinned beautiful artist had an early start with the release of her debut EP, See.SZA.Run in 2012. Following the R&B path, SZA got signed with Kendra Lamar’s label, TDE in 2013, although she was not able to release her debut album till 2017 when Ctrl hit the scene.

Solána’s voice has had a constant re-echo as she bares her soulful and strong lyrics in her songs. Her track on the Ctrl album, “The Weekend” earned her No. 1 on the R&B Billboard list in 2018. Her top hits also include her popular 2023 “Good Days” song, “Hit Different”, “Love Galore” and more.

Her voice is one that has grown to be prominent among female R&B artists and we look forward to seeing her gain more influence in music.

Normani is currently a huge rising star, doing all the right things at this point in her career. She joined the girl group Fifth Harmony, but when things didn’t work out quite well the whole venture went on a hiatus, Normani took her own path.

So far, she has collaborated with some of the big names in the industry like Khalid, Ariana Grande, Nicki Minaj, Sam Smith, Calvin Harris. Her collaboration with Khalid created the song “Love Lies,” which was certified 5x platinum by RIAA. So it is imminent that she will become the next big name in the pop music industry accumulating millions of fans.

28-year old Saweetie is one of the female artists with a prominent social media presence, especially on TikTok and Instagram. Before her major career launch, Saweetie had maximized her presence online presence by sharing her rap videos on YouTube and Instagram.

Her works paid off when her rap lines in Khia’s single, “My Neck, My Back”(Lick It) turned out to be her first hit single, “Icy Girl” and gave her a big break in music as an upcoming artist. “Icy Girl” earned Saweetie a three-time platinum certification, and this has been followed by several No. 1 hit on the Billboard charts. This includes her ‘Fast (Motion)’single, “Tap In”, “Back”, “My Type” among others.

Her long-anticipated debut album, Pretty Bitch Musicis set to drop in soon and the world is expectant of her super artistic delivery as always.

Ray BLK is quite a talented singer, if you haven’t ever listened to any of her works, I suggest you do. Originally named Rita Ekwere, Ray has been singing since her childhood. She became the first unsigned singer to win the BBC’s Sound of 2017. It was a huge achievement that led to her signing a contract with Island Records.

Ray opened the Nicki Wrld Tour in 2019 in London gaining mainstream coverage from both the UK and US. After these appearances, she has been mostly out of the news, as she didn’t upload many songs. However, she is creating a bunch of them according to her social media walls.

Meet multi-talented Melissa Viviane Jefferson, the trained flutist who is also a singer and rapper, professional known by her stage name, Lizzo.

Her music career began early in the 2010s with her performances with groups like the electro soul-pop duo, and Lizzo and the Larva Ink. By 2013, Lizzo had popped out her debut album Lizzobangers, followed by the second in 2016, Big Grrrl Small World. She earned her first Billboard 200 hit with the release of Cuz I love you in 2019.

Being a radiant ‘big girl’ herself, the singer has featured and collaborated with top stars including Cardi B, Ariana Grande, Lil Nas X, Rihanna, Harry Styles, Shania Twain among others.

Have you listened to the song “I Can’t Breath?” It won the Grammy for 2023 Song of the Year. H.E.R. is the creator of such a beautiful and truthful song that you’ll ever come across. She has been creating such music for quite a long time now and has been recognized on international platforms.

She started with her brand new persona “H.E.R” as Having Everything Revealed in 2016, and it was a game-changer. She has won Grammy multiple times with around a dozen nominations for her EPs H.E.R Volume 1, H.E.R Volume 2.

So yeah, there is no doubt that with time, she will become a phenomenal star with her musical wonders.

Teyana Taylor is another talented musician in the industry. She is actually multi-talented as dancing is a skill she possesses and really great at, besides singing and songwriting. She is currently in a contract with Def Jam record label.

The BET Hip Hop Awards and MTV Video Music Awards winner singer released her album The Album in 2023. It charted at 8th position on the Billboard 200. Since then Teyana has been on a bumpy road in her personal life and career, as she expressed her unhappiness with her label and announced that she’ll part her way with it.

Alicia Keys started her career as a child prodigy in music. From her childhood, she was trained in classical music bringing out the best flavors for the earbuds. Alicia’s journey into the world of composition started when she was only 12. The labels soon discovered her talent and made Columbia Records signed her in.

She has for the last 20+ years created numerous pieces of music in various R&B, soul, and pop to make herself an authority in the market. With 15 competitive Grammy Awards, Songwriters Hall of Fame, and the top R&B artist of the 2000s- Alicia is still a huge star in the year 2023.

The English singer-songwriter came up with the unique style of electronic and R&B which took the listeners by surprise. So much so that her debut album “For All We Know” got her to the nomination of Best British Female Solo Artist.

NAO’s single “Another Lifetime” came in 2018- another massive hit. Chic and Mura Masa accompanied the performance of the song. Although she hasn’t yet come under the big lights, it’s a massive probability that she’ll very soon. So if you’re looking for a star to follow in 2023, she might be the one.

Jhené’s first album was to come in 2003 named My Name is Jhené but not only did it never came, but also she didn’t release another one in 2011. Such a mysterious gap is rare in the industry. However, she made it back with a mixtape, which got people’s attention.

Since then, she signed ARTium and started a small performance. In 2014, her first major album came up — Souled Out. Two albums followed it subsequently, from which the last one released in 2023 named Chilombo gave her three Grammy nominations.

Toni Braxton is a name every music lover knows. A professional musician since the 80s, she has achieved wonderful things throughout her career. Including seven Grammy Awards, nine Billboard Music Awards, seven American Music Awards, and selling 41 million albums.

Active in the industry for more than three decades, the craze for Toni hasn’t faded. She signed Island Records in 2023, another one in her long lists, and released the single “Do It.” Her tenth album came in the same year Spell My Name, another extremely popular work. Such a long career with so many great works — music lovers have supported her all through her career.

Here is a newcomer in the industry. Summer released her debut album in just 2019 and didn’t take her long to come to people’s attention. The album, Over It, charted at the 2nd position on Billboard 200. Not stopping there, RIAA has certified it as platinum- it’s an incredible achievement.

Her second EP came in 2023, named Life on Earth, this beautiful album came atom the Billboard top R&B chart. Obviously, she is going to make a huge career in music, as her beginning shows. We’ll be waiting for her next work eagerly as she was RIAA gave her gold on her recent single “Session 32.”

Brandy Norwood has been in and out of the headlines for quite a long time. Her long-lasting fame perished with a scandalous motor accident that took place way back in 2006. The extremely popular African-American singer of the ‘90s, a recipient of Grammy Awards, best-selling female duet artist of all time, and an actress had to regain her status in a painful way.

The R&B and pop songs Brandy started from the beginning, appearing in programs as a contestant, joining reality shows, releasing singles. Her hard work eventually paid off, as her songs started to gain critical acclaim in several places. Brandy’s latest album was in 2023 named B7.

It is great to see her recover and also an inspiration to so many people who refuse to give up.