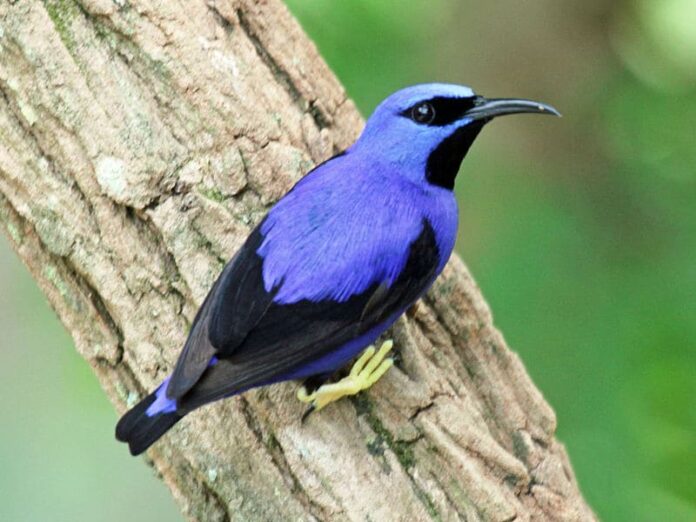 Animals are one of the most amazing things nature has created and each of them carries different behaviour and comes in a variety of colors. Overall, the Animal kingdom has millions of majestic and mysterious animals species. Here is the list of purple animals that exist in nature,

Purple Emperor Butterflies is one of the beautiful purple animals native to central-southern England and loves to feed on aphid honeydew and tree sap. The male species come to the ground occasionally in search of salts either from road surfaces or from animal dung. The population of the species declined steadily during the twentieth century and now visible in areas of southern England. The female species looks similar to the White Admiral and have an orange-ringed eyespot under the forewing. It belongs to the family nymphalids and has a wingspan of 75-84mm that vary from male to female species.

Purple Emperor Butterfly is also known as Apatura iris is a Palearctic butterfly that belongs to the family Nymphalidae. Males have a wingspan of 70–80 millimetres (2.8–3.1 in) with purple-blue sheen caused by iridescence. The larvae of the caterpillars is green along with white and yellow markings. It comes with two large “horns” at the anterior end and a smaller one at the posterior.

Also Read:16 Most Beautiful Eagle Species In The World

Purple Beetles are active predators that usually come out in the night to hunt slugs and even other invertebrates in gardens, woodlands and meadows. It can grow upto 3cm and mostly visible between March to October every year. The nocturnal predators are the ones catching smaller invertebrates and they are beneficial to gardeners. Taling about the appearance, the species has a black colour with a metallic-purple sheen that is around the flattened edges of its fused wing cases (elytra). It is also known as a rain beetle and belongs to the family Carabidae. The animal species can be seen throughout Europe and Japan.

Purple Sea Snail is also known as Purple Ocean Snail known to have a delicate shell that grows upto 3.5 cms (1.4 inches) across and is light purple on top and dark purple below. The species loves to feed on Portuguese-man-of-war jellyfish, Blue Ocean Slugs and Velella. The species is very closely related to the Pallid Janthina (Janthina pallida) is very rarely found in Bermuda. The shells are usually the size of a penny but they can grow twice that size and are lavender on top and dark purple below.

Also Read:10 Different Types of Owls In The World

Orchid dottyback is also known as the Fridman’s Dottyback or Fridman’s Pseudochromis is one of the beautiful purple animals mostly seen in the Red Sea. It is seen in colonies near ledges where they can feed on the passing zooplankton. It is similar to the Magenta Dottyback (Pseudochromis porphyreus), however, Orchid dottyback has a black stripe through the eye while the Magenta will not. The species can grow upto 3 inches (8 cm) and have a lifespan of 5 – 7 years but it can be longer. It is free in captivity and is of some commercial importance as an aquarium pet.

The purple frog scientifically known as Nasikabatrachus sahyadrensis belongs to the family Sooglossidae. It is mostly seen in the Western Ghats in India. It is also known as the Indian purple frog or pignose frog and it was formally described in October 2003. The first specimen was collected in the Idukki district of Kerala by S.D. Biju from the Tropical Botanic Garden and Research Institute in Palode, India, and Franky Bossuyt from the Vrije Universiteit Brussel (Free University of Brussels), in 2003.The species most of the time underground and emerge only for a few days after the start of the monsoons to breed. The Pacific tree frog is one of the color changing animals in the world.

Purple Snakes scientifically known as Amblyodipsas is a genus of snake found in Africa. It is also known as purple-glossed snakes or glossy snakes and all species are considered harmless. The venom of the species is not studied well and confused with the glossy snakes of the genus Arizona, which are found in North America. The snake species is very short along with five teeth which increases in size gradually after an interspace. The body is cylindrical and scales are smooth without pits.

Eastern indigo snake is a non-venomous snake that belongs in the family Colubridae. The snakes species is one of the purple animals native to the eastern United States.This is the longest snake native to the US mostly in all of North America.

The purple martin is the largest swalloPurple starling bird native to North America. It has beautiful dark blackish-blue feathers and has an iridescent sheen caused by the refraction of the incident light. The breeding range of the species includes central Alberta down through the eastern United States and the subspecies seen in the Baja California, Arizona, and New Mexico. The migratory bird’s passerines make a short stopover in the Yucatán Peninsula or Cuba during pre-breeding migration to North America and during post-breeding migration before they reach to South America. It can grow upto 7.5-7.9 in (19-20 cm) and have a wingspan of 15.3-16.1 in (39-41 cm).

Ochre sea star scientifically known as Pisaster ochraceus and popularly known as purple sea star, ochre sea star, or ochre starfish. It is one of the beautiful purple animals seen among the waters of the Pacific ocean. It can grow upto 10 to 25 centimetres (4 to 10 in) and the rays are arranged around an ill-defined central disk. Almost all the species are purple but some of them can be orange, orange-ochre, yellow, reddish, or brown. The avarage lifespan of the species is four years and loves to feed on chitons, limpets, snails, barnacles, echinoids, and even decapod crustacea.

Purple firefish scientifically known as Nemateleotris decora is a species of the dartfish native to tropical waters in the Indo-West Pacific, from Mauritius to Samoa, north to the Ryukyu Islands, and south to New Caledonia. It is also known as elegant firefish and can reach upto a length of 9 cm (3 in). It is mostly seen in the pairs and is monogamous and loves to feed on zooplankton, especially the larvae of copepods and crustaceans. The species is one of the beautiful purple animals and has 7 spines and 27 to 32 soft rays while the anal fin has a single spine and 28 to 31 soft rays. Talking about the appearance, the head is purple and the body is whitish or yellowish colors.

Purple starling is also known as the purple glossy starling. It belongs to the member of the starling family of birds and mostly seen in tropical Africa from Senegal and north Zaire east to Sudan and western Kenya.One of the beautiful purple birds found in open woodland and cultivation. It can grow upto 22–23 cm long birds have a metallic purple head and body and glossy green wings. The tail of the species is short and have a yellow eye.

Insulamon palawanense also known as Palawan purple crab is a species of freshwater crab native to the Philippines. The species was first described in 2012. It can grow upto 2.5–5.3 centimetres (1.0–2.1 in) wide and are a striking purple colour. It was first described by Hendrik Freitag of the Senckenberg Museum of Zoology in Dresden, Germany.

Purple honeycreeper scientifically known as Cyanerpes caeruleus is a small bird species that belongs to the family Thraupidae. The species is mostly seen in the tropical New World from Colombia and Venezuela south to Brazil and on Trinidad. One of the beautiful purple animals was described by the Swedish naturalist Carl Linnaeus in 1758 in the tenth edition of his Systema Naturae under the binomial name Certhia carrulea. The bird species is 4.5 in (11.5 cm) long and weighs 0.42 oz (12 g) known to have a long black decurved bill. The male species is purple with black wings, tail and belly, and bright yellow legs.

Janthina Janthina is a common name given to the violet sea-snail or common violet snail. The species is of holoplanktonic sea snail which is a marine gastropod mollusc that belongs to the family Epitoniidae. It is seen in all oceans across the world and prefers warm waters of tropical and temperate seas. It is mostly located in the tropical and subtropical Atlantic, Indian and Pacific oceans.