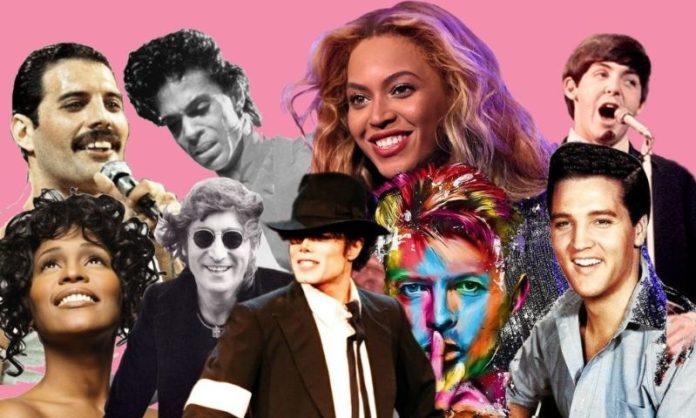 Very few people have the ability to express their passion, emotion, or even simple messages so eloquently than musicians. The songs they write, the music they compose, and the message they spread heal the world, unite the people and fight against all evil.

It is obvious that these people can be a source of deep knowledge, and their creation could set you on a quest for wisdom. We have accumulated a glimpse of these musicians’ collective knowledge and their message to the public.

“A record deal doesn’t make you an artist; you make yourself an artist.” ― Lady Gaga 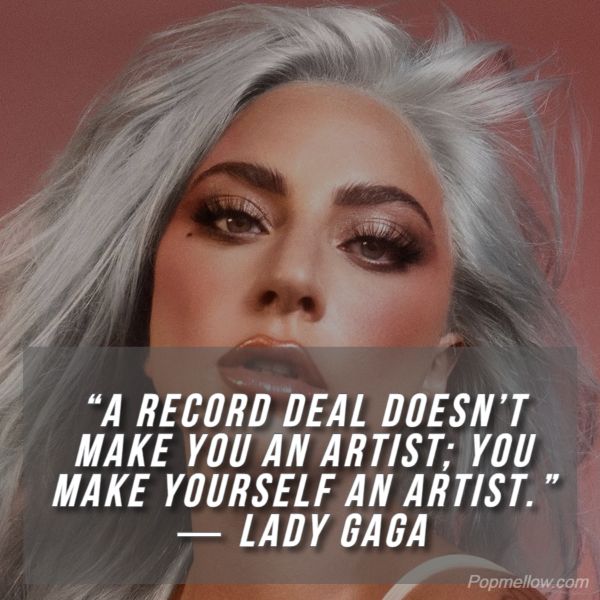 “The greatest education in the world is watching the masters at work.”― Michael Jackson

“I believe that children are our future. Teach them well and let them lead the way. Show them all the beauty they possess inside.” ― Whitney Houston

“Like Christ said, love one another. I learned to do that, and I learned to respect and be appreciative and thankful for what I had.” ― James Brown

“Don’t be hard on yourself. And take as many chances, risks, as you can.” ― Robert Plant

“Nothing pleases me more than to go into a room and come out with a piece of music.” ― Paul McCartney

“Poor is the man whose pleasures depend on the permission of another.” ― Madonna

“Life’s short. Anything could happen, and it usually does, so there is no point in sitting around thinking about all the ifs, ands and buts.” ― Amy Winehouse

“You know, people can’t fall in love with me just because I’m good at what I do.” ― Robert Plant

“I get nervous when I don’t get nervous. If I’m nervous I know I’m going to have a good show.” ― Beyoncé

“My movements, ma’am, are all leg movements. I don’t do nothing with my body.” ― Elvis Presley

“I like being a woman, even in a man’s world. After all, men can’t wear dresses, but we can wear the pants.” ― Whitney Houston

Have you downloaded Our Quotes Android App?

“When I decided to be a singer, my mother warned me I’d be alone a lot. Basically we all are. Loneliness comes with life.” ― Whitney Houston

“I’m a human being and I fall in love and sometimes I don’t have control of every situation.” ― Beyoncé

“you can’t base your life on other people’s expectations.” ― Stevie Wonder 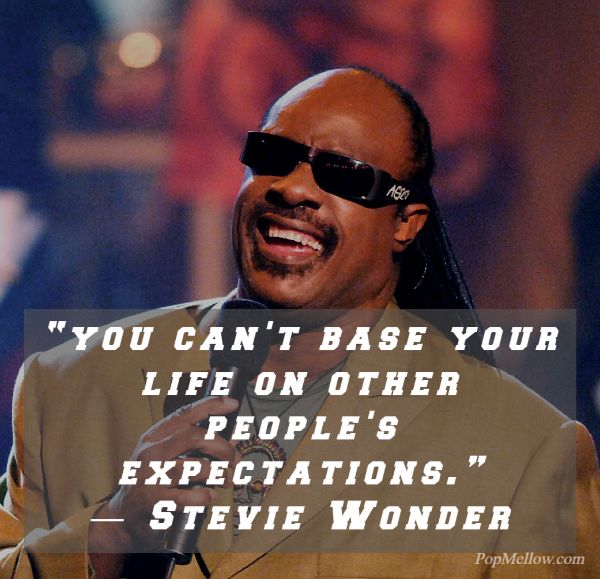 “There are many spokes on the wheel of life. First, we’re here to explore new possibilities.” ― Ray Charles

“I used to think anyone doing anything weird was weird. Now I know that it is the people that call others weird that are weird.” ― Paul McCartney

“I’m not a prophet or a stone aged man, just a mortal with potential of a superman. I’m living on.” ― David Bowie

“I want to be like Gandhi and Martin Luther King and John Lennon but I want to Stay Alive.” ― Madonna

“The whole business is built on ego, vanity, self―satisfaction, and it’s total crap to pretend it’s not.” ― George Michael

“If I died tomorrow, I would be a happy girl.”― Amy Winehouse

“I never expected to be anybody important.” ― Elvis Presley

“Truth is like the sun. You can shut it out for a time, but it ain’t goin’ away.” ― Elvis Presley

“We’re a bit flashy, but the music’s not one big noise.” ― Freddie Mercury

“There’s no comfort in the truth, pain is all you’ll find.” ― George Michael 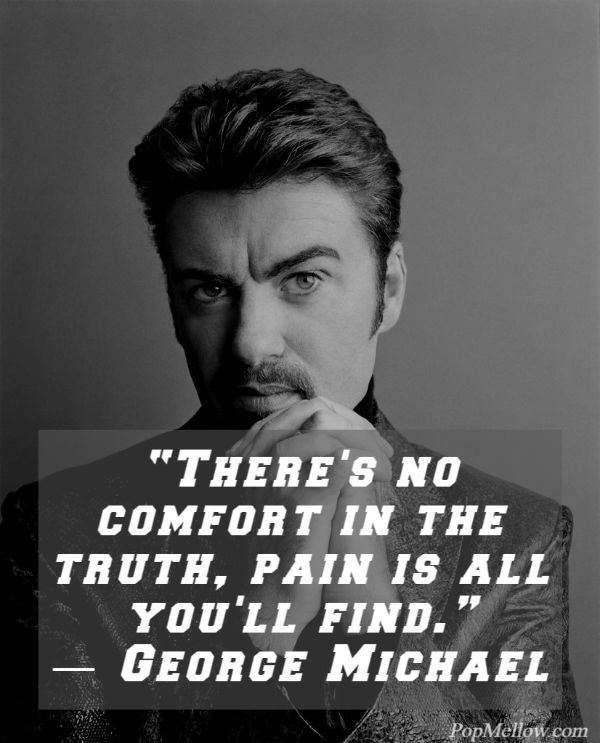 “Love is like a brick. You can build a house, or you can sink a dead body.” ― Lady Gaga

“Being a singer is a natural gift. It means I’m using to the highest degree possible the gift that God gave me to use. I’m happy with that.” ― Aretha Franklin

“I think that passion and love and pain are all bearable, and they go to make love beautiful.” ― Robert Plant

“Sometimes you struggle so hard to feed your family one way, you forget to feed them the other way, with spiritual nourishment. Everybody needs that.” ― James Brown

“Love is a special word, and I use it only when I mean it. You say the word too much and it becomes cheap.” ― Ray Charles

“The one thing that can solve most of our problems is dancing.” ― James Brown

“The martial music of every side burned delinquent on the face of the earth.” ― Frank Sinatra

“If slaughterhouses had glass walls, everyone would be a vegetarian.” ― Paul McCartney

“Reality leaves a lot to the imagination.” ― John Lennon

“I write songs about stuff that I can’t really get past personally ― and then I write a song about it and I feel better.” ― Amy Winehouse

“There’s a dark side to everything.” – Prince

“Just because a man lacks the use of his eyes doesn’t mean he lacks vision.” ― Stevie Wonder

“War is not the answer, because only love can conquer hate.” ― Marvin Gaye

“If you wanna make the world a better place, take a look at yourself, then make that change”. ― Michael Jackson

“Money may not buy happiness, but it can damn well give it!” ― Freddie Mercury

“I always knew I was a star And now, the rest of the world seems to agree with me.” ― Freddie Mercury

“Don’t you ever let a soul in the world tell you that you can’t be exactly who you are.” ― Lady Gaga

“Time you enjoy wasting, was not wasted.” ― John Lennon

“We all have ability. The difference is how we use it.” ― Stevie Wonder

“You better live every day like your last because one day you’re going to be right.” ― Ray Charles

“Sometimes it takes years for a person to become an overnight success.” ― Prince 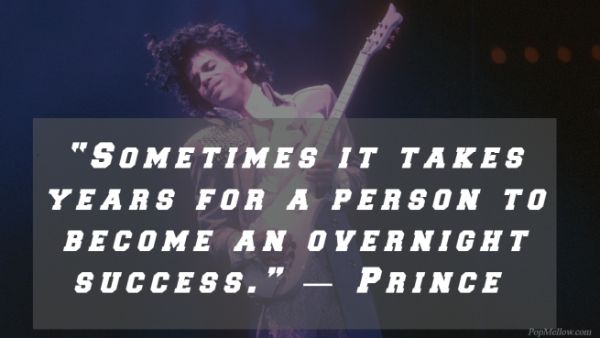 “I’m just an individual who doesn’t feel that I need to have somebody qualify my work in any particular way. I’m working for me.” ― David Bowie

“You’ll never find peace of mind until you listen to your heart.”― George Michael

“If you cannot find peace within yourself, you will never find it anywhere else.” ― Marvin Gaye

I am sure, these quotes aren’t nearly enough to comprehend the depth of their art. But if any of these words have spoken to your inner self, then I’m sure you wouldn’t need any more help to walk on the right path.