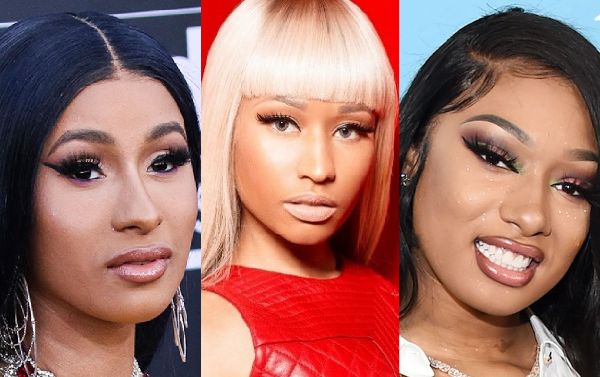 Rapping isn’t a piece of cake, we all know that, right? But how many legends can take this challenge and dedicate their lives to it?

We know some courageous women who are now the richest female rappers because of the name they gained and the fame they earned as a result of their consistent hits and outstanding rapping.

They are entrepreneurs, philanthropists, actors, songwriters, and much more apart from being a rapper and we can’t wait for enough to know who they are, what they have done, and what they are currently doing.

The list is curated as per the Celebrity Net Worth report of 2023. Let’s check out without wasting a single second.

That’s true, Nicki Minaj is the world’s richest female rapper right now, having a net worth of an estimated $100 million in 2023.

This 38-year-old Trinidadian rapper is worldwide famous for her outstanding rapping talent. She has gifted us some awesome collaborations with well-known artists like Beyonce, Flo-Rida, Rihanna, David Guetta, Justin Bieber, Ariana Grande, and many more. Her enchanting voice and quick rapping are something we can’t follow even if the lyrics are open in front of us. She is one of the leading personalities of Rapping.

Many of us are not aware that this rapper is originally known as Dana Owens. In 1989, this multi-talented rapper released her first album and since then to date, she has been ruling our hearts with her magical voice. The Grammy-award-winning rapper is quite well known as a ‘Feminist’ rapper. Want to know why? Go and check out “Ladies First”, her song released in 1989.

Performing since 1991, this 49-year-old rapper has been creating magic with her entertaining rap in the genres of Hip Hop and R&B. Melissa Elliott sold over 30 million records in the US. She has been consistently challenging her own limits with one-by-one hits and her fans are really proud of this lady. Initially, she started with a girl band named Sista, and then after a few years, she started her solo career.

If we talk about the top female rappers, we’d definitely think of a name “Cardi-B” originally known as Belcalis Marlenis Almánzar. The lady is only 28 years old, which is a quite young age to be on this list and this was recognized by Forbes. She is known for her songs with candid lyrics and singing with a passionate, intense flow.

The 54-year-old Jamaican-American rapper lived a tough life, being molested as a child, had some humiliating and violent relationships, but she appeared as a strong woman in front of us all. Being a rapper since the mid-1980s, Sandra (also known as Pep/Pepa) has shown as a supporting cast member in Growing Up Hip Hop which is a music reality TV show.

The 30-year-old Australian rapper’s real name is Amethyst Amelia Kelly. In her teenage, she moved to the US to start her career. In 2018, she created her own record label which then had a different name but now known as “Bad Dreams LLC” as announced by her on her Twitter account and fans were more than happy to hear that.

Known for her stage name, Salt, Cheryl James is another rapper on our list who has been making great money with her charismatic rapping. She also wrote some songs including “Shoop” and “Whatta Man”. The Salt-N-Pepa group shattered in the year 2002 and was never the same. Cheryl has now found dedicating her life to children and her creator, God.

M.I.A is also an activist apart from being a rapper. The 45-year-old singer is supporting many charitable organizations and proving that the money earned should be utilized in the most beneficial way for human welfare. Mathangi ‘Maya’ Arulpragasam is her original name and she did experiment with fusing electronic music and hip hop. Her songs usually have a philosophy and political touch in the lyrics.

Originally known as Deidra Muriel Roper, DJ Spinderella is another member of the then-band Salt-N-Pepa. She started her career in 1984 as a DJ. Who knew, that one day at school, a classmate would ask her if she’s interested to join a band, and now, that little girl has grown up as another top rapper. Roper announced in 2019 on Instagram that the band members have parted ways.

There is almost no profession left in the entertainment industry that Eve has not adopted. She is a rapper, actress, hostess, and songwriter too. The 42-year-old Eve Jihan Jeffers is known for her roles in the Barbershop film series. She earned her name due to collaborations with Gwen Stefani, Missy Elliot, Guy Sebastian, The Roots, and Kelly Rowland.

Originally known as Lana Michele Moorer, the 50-year-old rapper has been considered as the pioneers and beginners of rapping. Before being a teen, Moorer has been a rapper. She has the honor of performing at Carnegie Hall which is quite a big achievement in her career. She released her best collection in the form of an album named The very best of MC Lyte in 2001.

Having the real name, Katrina Taylor, the 42-year-old Trina is another name in our list of female rappers with the highest net worth. She married Reymond Taylor in 2017 and has been recognized by various magazines and news sources for her consistent hit and cool rapping. In 1998, she was contacted by an American Rapper, Trick Daddy who offered her to perform in his song “Nann” and this is where it all began.

Megan Thee Stallion has been known as Hot Girl Coach, Tina Snow, Hot Girl Meg, and many more names. The 26-year-old artist is famous for her freestyling on Instagram. At the age of 16, she became a rapping lyricist which were quite sexually suggestive as per her own mother. You might be curious why she is called Stallion? Her height is 5ft 10 inches which is quite a taller height, especially as a woman.

Danielle Marie Bregoli (Bhad Bhabie) is the famous girl behind “Catch me outside, how about that”, the very viral phrase which became meme material in 2016 and was a catchphrase. The 18-year-old rapper. In 2019, she signed a deal with Copy Cat Beauty’ for endorsement which is a famous beauty company.

Saweetie’s real name is Diamonté Quiava Valentin Harper but we believe this name is more synchronized with her beautiful looks. The 27-year-old American rapper stated at XXL magazine that she has been doing lots of covers but at that time she was doing something original. Also, an interesting fact about her is that she appeared in an advertisement for Fenty Beauty, a cosmetic company owned by Rihanna.

Say thanks to Big Pun, the American rapper, for discovering Remy Ma. In 2006, her first studio album was released. Married to Papoose in 2008 and having 2 children, Reminisce Smith fought with her personal, domestic problems by writing poetry and later was mentored by Big Pun who gave a kick to her career and featured her in his songs.

Getting fame through MySpace, Azealia Banks has been very socially active and has been giving statements and views on the USA politics, racism and has been bluntly speaking about her perceptions and therefore has got a lot of media attention. From being humiliated and abused by her mother at a very young age to receiving criticism and facing controversy, the 29-year-old Azealia has gone through a long yet difficult journey.

Why called M.A? It stands for ‘Me Always’. Her song “Ooouuu” got 300 million views on YouTube within a short span of time and then it never stopped. With her mother, the 28-year-old Katorah Hortense Marrero started KWEENZ Foundation in 2018 that serves families in need. She raps on topics such as violence, wealth, sexuality, and acquisitions.

Professionally known as Kash Doll, Arkeisha Antoinette Knight became famous when her songs “Ice Me Out” and “For Everybody” were released and people started recognizing her rapping. The 29-year-old started her career as a strip dancer but was more into writing lyrics and rapping. She has also collaborated with Iggy Azalea in 2019 named “Fuck it up”. The outstanding chemistry between both girls gave us some real chills.

The 42-year-old Trinidadian-American rapper has been creating magic since 90s and we can’t get enough of it even in 2023. Influenced by Salt-N-Pepa and MC Lyte, Foxy’s music usually contains topics like mafia and fashion. Her husky flow has been loved by millions around the world and we want more from her in the future especially more duets.