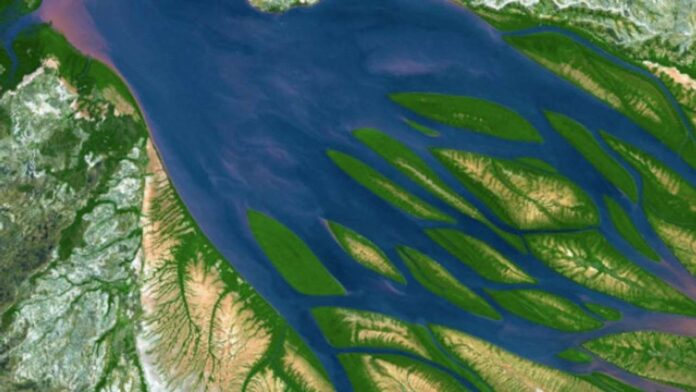 Nasa has once again shared beautiful and stunning images of natural systems on Earth from space. According to the post, the pictures, shared on NASA’s official Instagram account, were taken from the vantage point of the International Space Station.

“In these stunning images, the natural systems – land, water, air, ice – connect to each other to bring life. No matter whether we are on land or in space, we are unified by this tiny blue planet – and that’s something to celebrate,” read a message from NASA as it shared the pictures online.

This is the first picture of Bombetoka Bay in Madagascar. NASA captions it as On the northwestern coast of Madagascar, the salty waters of the Mozambique Channel flow inland joining the freshwater outflow of the Betsiboka River, forming Bombetoka Bay.

The secod image is of Richat Structure in Mauritania and it is formed when a volcanic dome hardened and gradually eroded, exposing the onion-like layers of rock.

Everglades of South Florida is a UNESCO World Heritage Site is an International Biosphere Reserve, and a Wetland of International Importance.

The below picture is of the frozen Dnieper river in Europe.According to NASA, image was captured by European Space Agency astronaut Thomas Pesquet, from ISS on February 9, 2017. About the photo, Thomas said, “Winter landscapes are also magical from the International Space Station: this river north of Kiev reminds me of a Hokusai painting.”

This is image of the sea of dunes on Mars which has been sculpted by the wind into long striations and is surrounding Mars’ northern polar cap. According to the caption, it covers an area as big as Texas.