Glasswinged Butterfly wings are transparent and the tissue between the veins looks like glass. This will make the predatory birds highly difficult to track. They are mostly seen in Mexico, Panama, and Colombia and the butterfly known for migrating great distances and also seen in far places such as Florida. Glasswinged Butterfly loves to feed on plants such as Lantana, a shrub with aromatic flowers and even lay their eggs on these plants. Male species of Glasswinged Butterfly convert the alkaloids into pheromones that are used to attract females.

Also Read: What’s the difference between a llama and an Alpaca 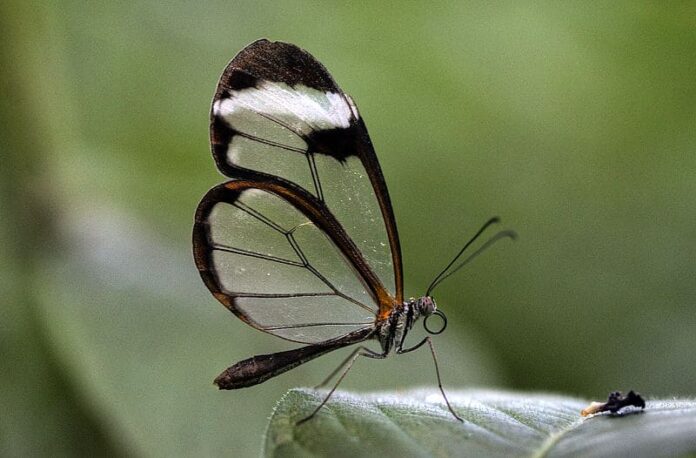 Currently, we have 60 different Glass Squid species and all of them comes with a unique experience. These species found in the middle of the ocean where sunlight will be combined with the transparency that looks like camouflage. They are known for their swollen body and short arms along with two rows of suckers or hooks. The species belongs to the family Cranchiidae and they are also known as cranch squids. The size of the species is approximately 180 millimetres known for its thickness in its mantle similar to the photo. The female one is a little larger than the males. 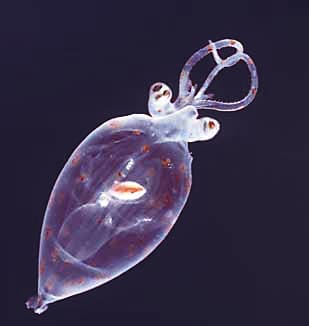 Salp is a semi-transparent barrel-shaped marine animal mostly seen in the deep waters. The species mostly prefer equatorial, temperate, and cold seas. Almost all of them are in the Southern Ocean and they are also listed as the second most abundant class of zooplankton. Sea salp has a fast lifecycle where they grow to maturity in 48 hours. It is believed that they are the fastest-growing multicellular animal on Earth that can increase the body length by upto 10% per hour.Sea salp is a food item for many fishes such as Smalley Squaretail, Chinaman Leatherjacket, Ocean Sunfish, and the Blue-ringed Angelfish. 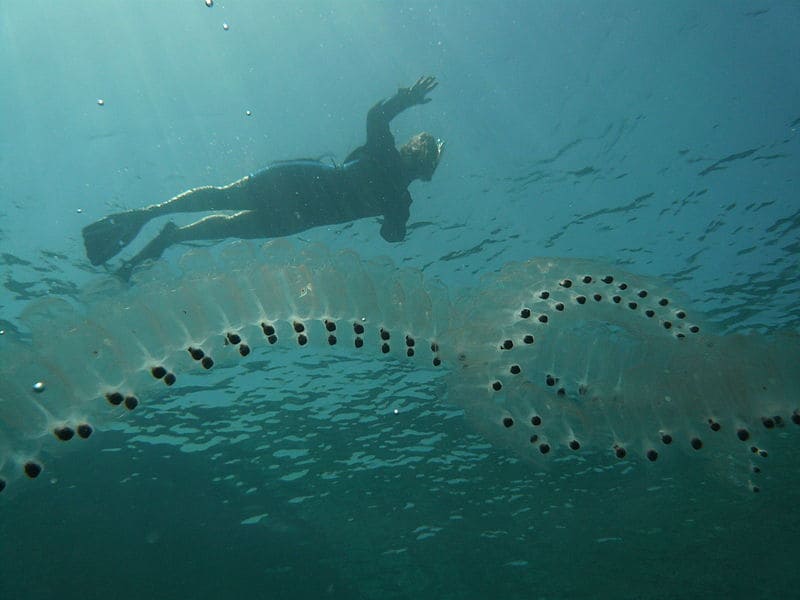 Glass octopus is transparent and the only opaque parts of the body are digestive organs and eyes. It is not able to change colour like other octopus species but the transparency provides the same function with camouflaging. It is almost invisible to predators and by this way, it has managed to survive and invade its enemies. It can reach upto 11 cm (4.3 in) in mantle length and 45 cm (18 in) when you include the tentacles. The species mostly prefer tropical and subtropical waters across the world at depths between 165 and 1,690 metres. The male species has an arm modified into a sexual organ known as the hectocotylus. Glass Frog is also known as the “see-through frog” named after its translucent skin. As of now, there are 60 different types of glass frogs mostly seen in southern Mexico, in Central and South America. The size of the species depends on the frog and the smaller one can grow upto 0.78 inches long and the larger one can reach 3 inches in length. Talking about the appearance, the body of the frog is bright green or olive green in colour and it is covered with black, white, blue or green spots. The avarage lifespan of a glass frog is usually between 10 and 14 years in the wild.

Also Read: 10 Most Beautiful Fishes In The World 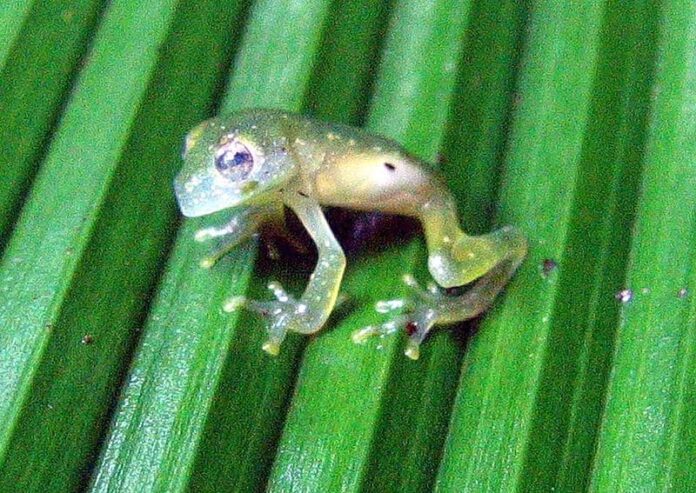 Sea Walnut is scientifically known as Mnemiopsis leidyi which is common throughout the ocean but the population spikes seasonally. The animal species are transparent but they can produce light when agitated and mostly seen flashing brightly in boat wakes at night. It is mostly seen on the east coast of North and South America. It was first discovered in the black sea in the year 1982. Sea Walnut feed on zooplankton that the commercial fish also consume. 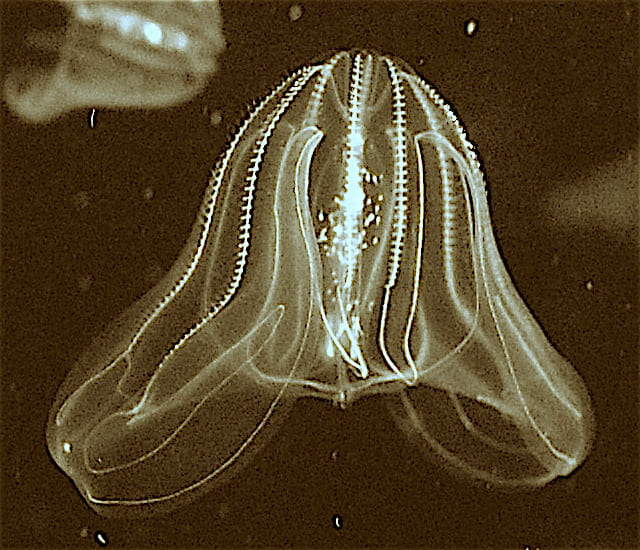 Glass Catfish are also known as Ghost Catfish or Phantom Catfish that depends on different species of skeleton catfish. Talking about the appearance, it has transparent skin and both bones and organs are clearly visible. The species is originally from Thailand and prefer moderate moving rivers and streams. Scientifically known as Kryptopterus vitreous, it can grow upto 8 cm (3.1 in) but on an avarage 6.5 cm (2.6 in) in total length. It is transparent because it is scaleless and lacks body pigment. The heart can be seen beating and the organs are located near the head. 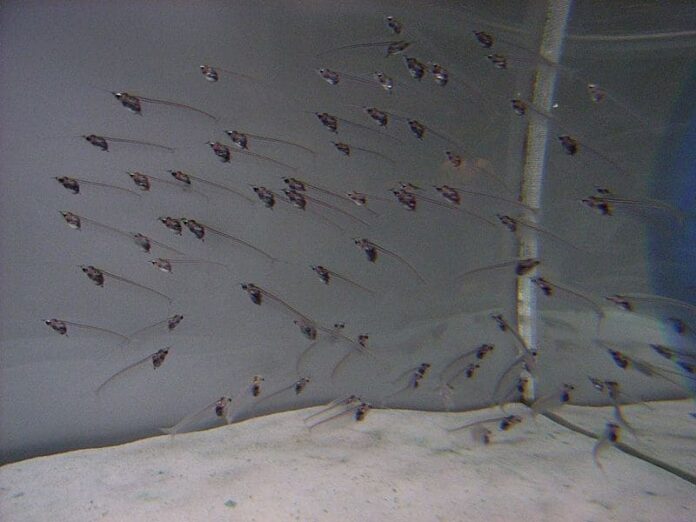 Sea Angel is free-floating sea slugs that has an appearance like appendages called parapodia and a gelatinous. The body is almost transparent and they are absolutely tiny and can stretch upto 5 cm long. Sea angels have been found all along the north-east coast of Australia and also around Papua New Guinea. Sea angels are protandrous hermaphrodites which means they are born as males but convert into females throughout the course of their lives. When sea angels want to mate, they will draw in close to one another and turn their reproductive organs inside-out. 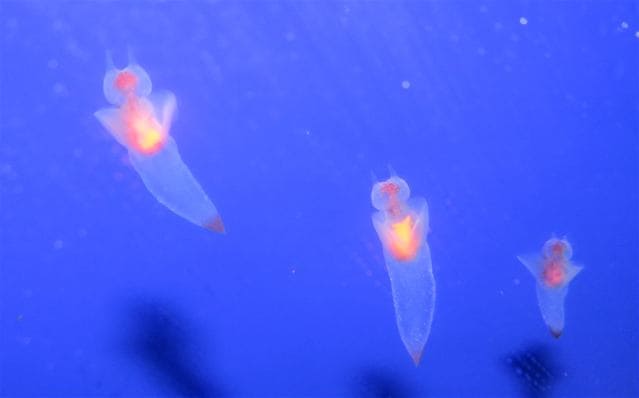 Jellyfish is a swimming marine animal that has more than 350 species and seen in all the oceans across the world. There are many species that can be seen in the freshwater too. The smallest jellyfish is Irukandji and the largest one is Lion’s mane which is almost 8 feet wide in diameter. Jellyfish can be transparent or vividly coloured and has a bell or umbrella-shaped body but the tentacles length depend on the species of the body. The lifespan of the species ranges from several hours to several months that is also depends on the species. 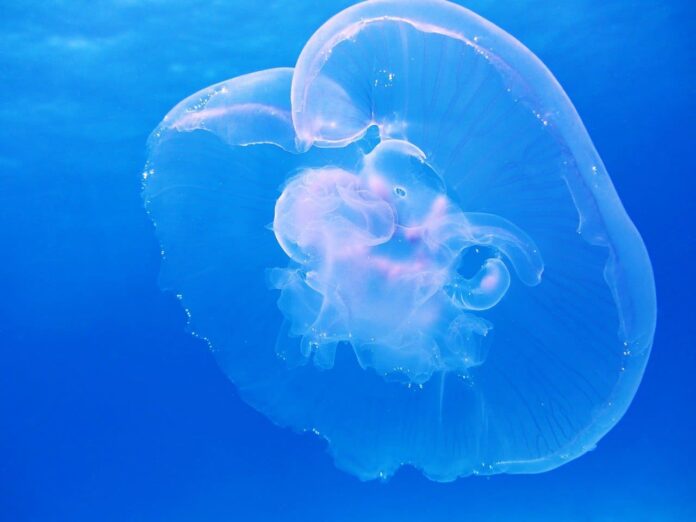 Phronima is a transparent genus of small, deep-sea hyperiid amphipods that belongs to the family Phronimidae. It is seen in all oceans across the world except in polar regions. They are mostly seen in the pelagic zone of the deep ocean. It has a semi-transparent body and commonly known as the parasites and are also known as the parasitoids. Talking about the appearance, they are barrel-shaped gelatinous zooplankton that drifts throughout our oceans. 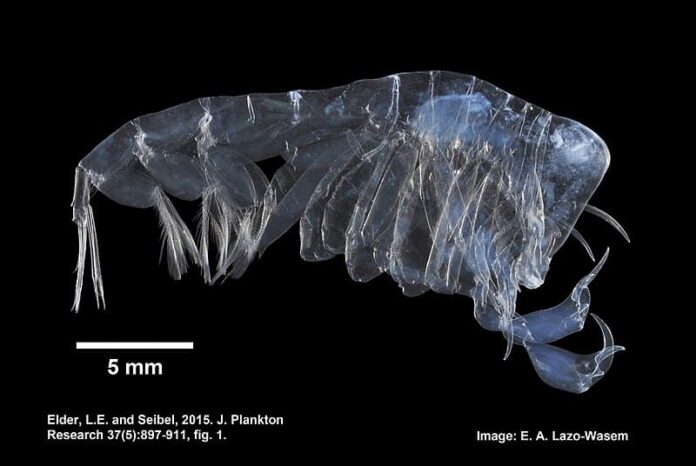 Antarctic Icefish is one of the transparent animals seen in the icy cold waters of the Arctic. They dont have haemoglobin that carries oxygen throughout our body and hence they are whitish and have nearly transparent blood. Even the gills are white in colour and without haemoglobin, they can still get enough oxygen and even scientist are not sure about it. The one reason is that they are already living in oxygen-rich waters and might be able to absorb oxygen through their skin or through their large heart and even plasma which may help transport oxygen more easily. The icefish was discovered in 1927 by zoologist Ditlef Rustad during an expedition to Antarctic waters. 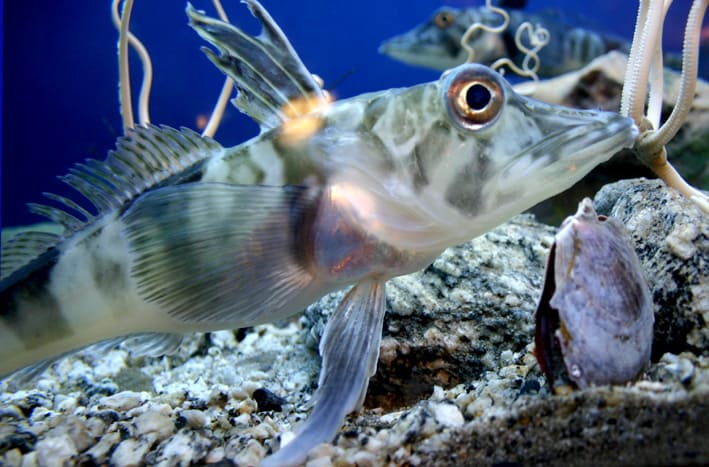 Sea Gooseberry is scientifically known as Pleurobrachia pileus seen in the open water in the northern Atlantic Ocean, the North Sea, the Baltic Sea and the Black Sea. The species was first described by the Danish zoologist Otto Friedrich Müller in 1776. It can grow upto 2.5 cm (1 in) in length with long tentacles that can that is primarily used to catch preys. They are mostly seen in the northern Atlantic Ocean and along the northwestern coasts of Europe. The regions include the Baltic Sea, the Skagerrak, the Kattegat and the North Sea. The pelagic species that occurs in the open water occasionally also seen in rock pools or washed up on the beach. 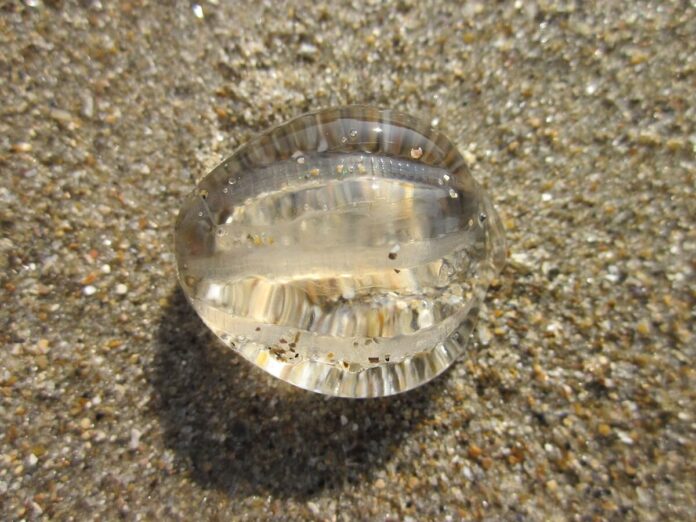 Ghost Shrimps can grow upto 60 cm (2 feet) below the surface and is also capable of building tunnels underground which generally contain water. They are known for their soft, flexible bodies and also transparent animals that come with a large claw that sometimes grows up to half the size of itself. The male species is larger than the females. The Australian ghost shrimps are native to the eastern coast of Australia. It is also known as marine yabbies, pink nippers, burrowing shrimps, ghost nippers, nippers, yabbies and Australian ghost shrimps. Scientifically known as Trypaea Australians and also known as Callianassa australiensis, and they are from the family of crustaceans. 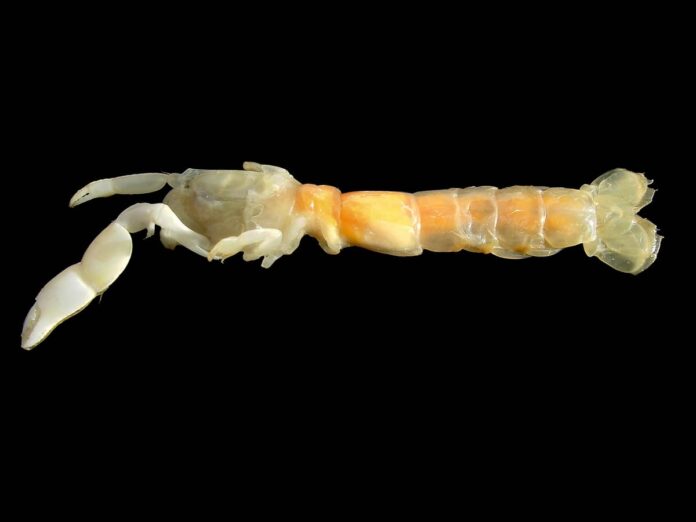 A chain of Salpa Maxima is a that moves by contracting and hence pumping water through its gelatinous body and therefore one of the perfect examples of jet propulsion in the animal kingdom. The species pumped water through its internal feeding filters and feeding on phytoplankton. They used to thrive on equatorial, temperate, and cold seas and the most abundant concentrations of salps are in the Southern Ocean near Antarctica. 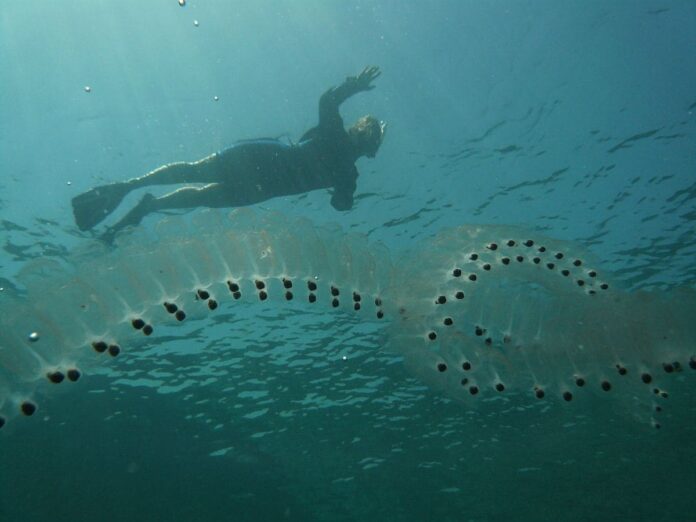 Amphipod Cystisoma Neptuni has a transparent body with the exception of the stomach and its compound eyes. It used to feed on soft-bodied animals. The eyes collect the rays of light in crystalline cones and lead them to the tips of light-guiding tubes that are connected to the optic nerves. The transparent body helps the crustacean from being detected and caught by predators. 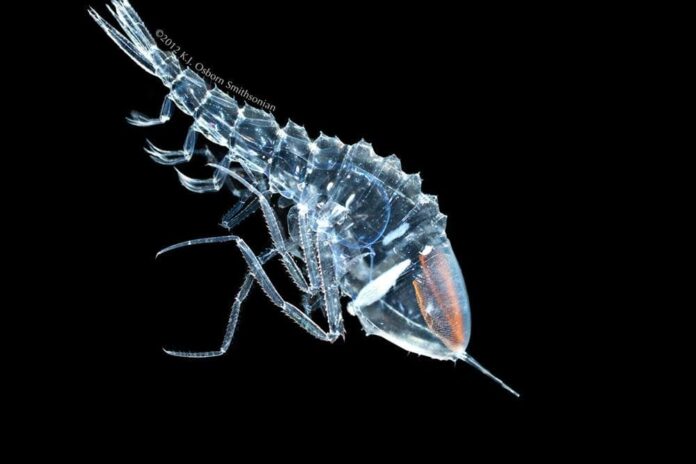 Pelagic Nudibranch has also known as the blue dragon, sea swallow or blue angel is a species of the brightly coloured sea slug that is mostly seen through the Atlantic, Pacific and Indian Oceans in temperate and tropical waters. The unique part is that the animal species incorporate toxic chemicals or stinging cells from their prey into their own skin and this is one of the best mechanism against predation. 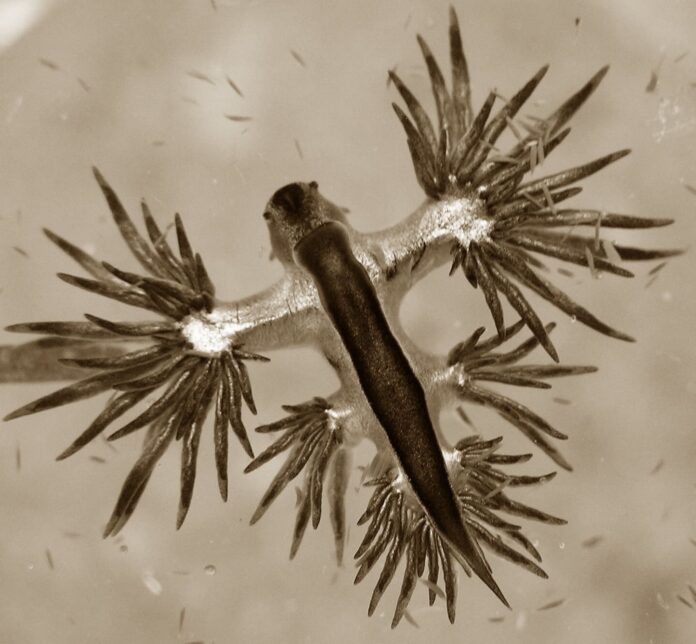