Home Nature 16 Types of Cats In The World 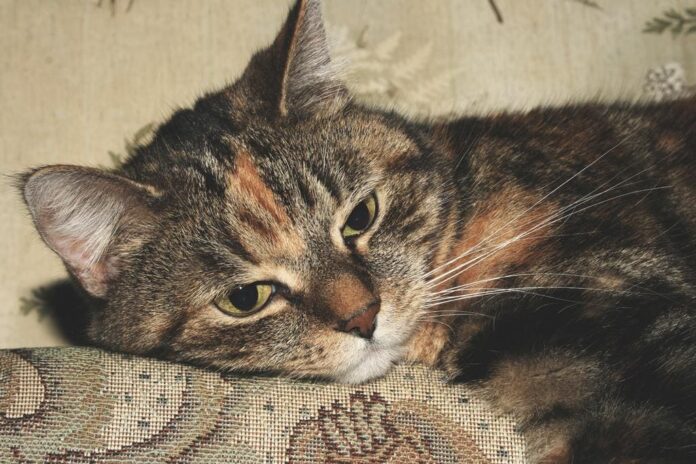 One of the most popular types of cats of worldwide, cats are the descendants of their jungle ancestors, tigers. They have as many as 71 standardized breeds, which are recognized by the International Association of Cats. These felines have many unique characteristics and are owned by many people across the globe as friendly companions. They may have quirky behaviour and use hissing, tail wags, slow blinks to communicate fear, boredom, anger, or just plain friendliness. They love to hide in the most bizarre things like laundry baskets, cardboard boxes, or cans, and can even grab objects like stuffed animals or feather dusters as prey! Below we will read about various exciting types of cats and their unique features.

This colourful domestic cat has short hair fur on its tabby coat and large almond-shaped eyes. Native to Abyssinia or Ethiopia, this cat has a coat with distinct bands of hair in different colors, which gives it a unique touch. Their heads are round and shaped like a wedge. They have small hair tufts on the tips of their ears that give them a cute appearance. This medium-sized cat is agile and muscular, and quite lively to play with. It shows interest in things around it and is a highly lively and sociable cat. 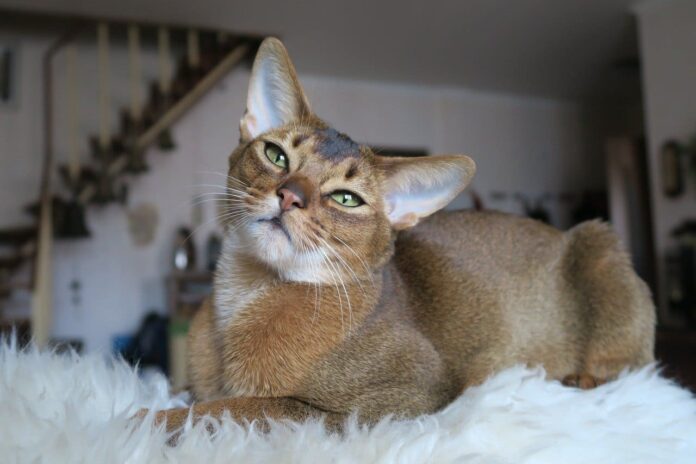 The American Bobtail cat is a popular American cat that has many qualities similar to those of a dog. They might look aggressive but are quite social and easygoing. These cats can become devoted companions who fit perfectly into families with children and other pets. Like dogs, they love to play games like fetch and hide-and-seek. These athletic animals can even enjoy walking on a leash with their people and make excellent therapy pets.

One of the types of cats, The Japanese Bobtail is domestic cats that are like cats on the front end and rabbits from the back due to their stubby, bunny tails. Their bobtails that look like a pom-pom are actually a result of genetic mutation. These cats are native to Japan and Southeast Asia but are now found worldwide. They are supposed to be an ancient breed that belonged to the Japanese monks.

You can identify them on Japanese and South-East Asian cat good luck symbols. These cats may have blue or gold eyes. It’s not a wonder if you find a Japanese bobcat with one eye blue and the other one gold! This is all because of something called heterochromia. 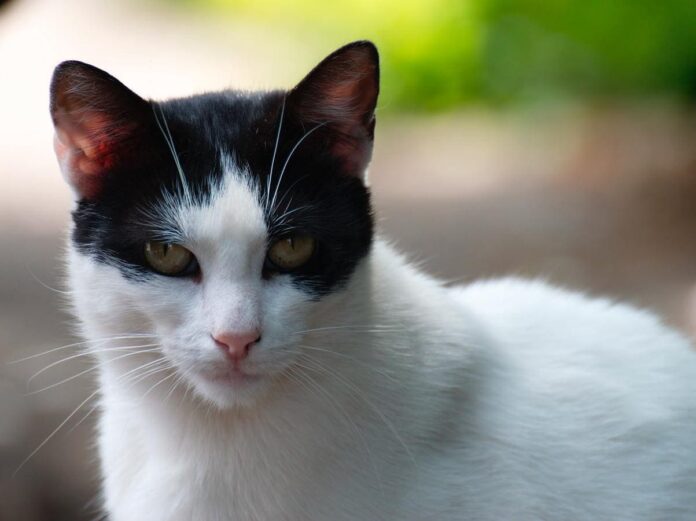 This is a large, stocky cat with lovely sapphire blue eyes and a long, silky fur coat. They come in a lot of colors and are very playful, friendly, and curious animals. They can play ‘fetch’ with you if they are not lying on your lap. They are supposed to originate from Burma and were later on taken to France. These cats are quiet yet amiable companions. 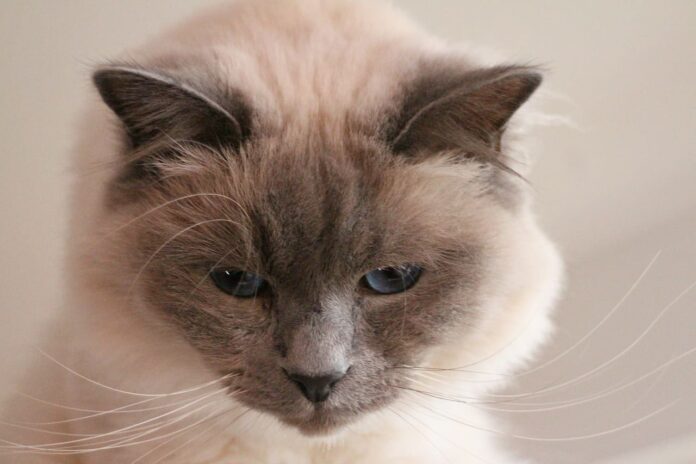 Remember the Cheshire Cat in Lewis Carroll’s ‘Alice’s Adventures in Wonderland ‘or the one in ‘Puss in Boots’? Well, that’s the British Shorthair Cat for sure. It is known for its chunky face and stocky body with thick, plushy fur. These cats are the pedigreed version of the traditional British domestic cat. You may find them in the most familiar “British Blue” or a solid grey-blue coat with orange eyes. They are quiet animals and easygoing companions. 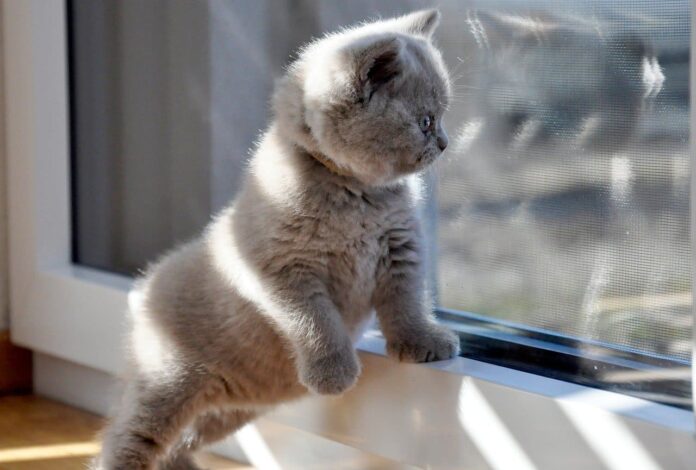 The Himalayan Cats are a sub-breed and hybrids of the Persian Cat and the Siamese. They have snowy white furs like the Persian cats and brown colouration at the tips of ear, feet and tail. Their eyes are deep blue like the Siamese cats. They are chubby animals that appear quite big and require high grooming for their dense fur. These friendly cats show sudden bursts of activity. You can find them running all around like kittens all of a sudden from their sleep! 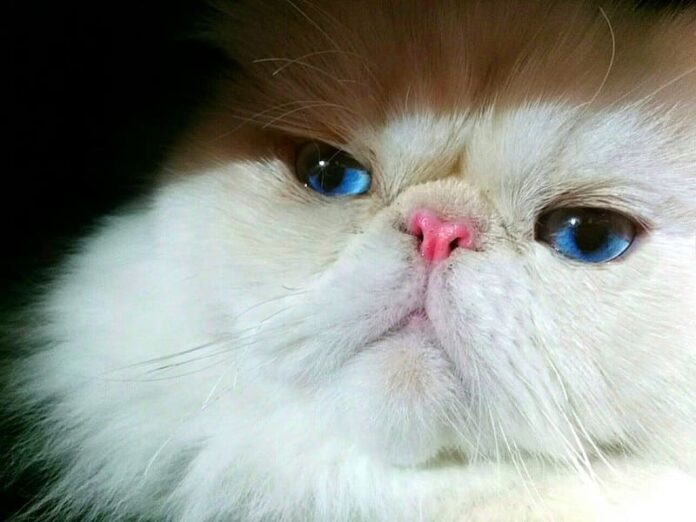 The Persian cats are also known as Longhairs and are counted among the “luxury” cats. These balls of fur have a beautiful, long-haired coat, sweet face, and calm personality have made them popular cats. These cats had their origin in Persia and were later brought to Europe. The Persian cat is a docile creature and enjoys a calm environment where it can relax. They can live for 15-20 years. The Persian kitty has been a favourite of Queen Victoria. 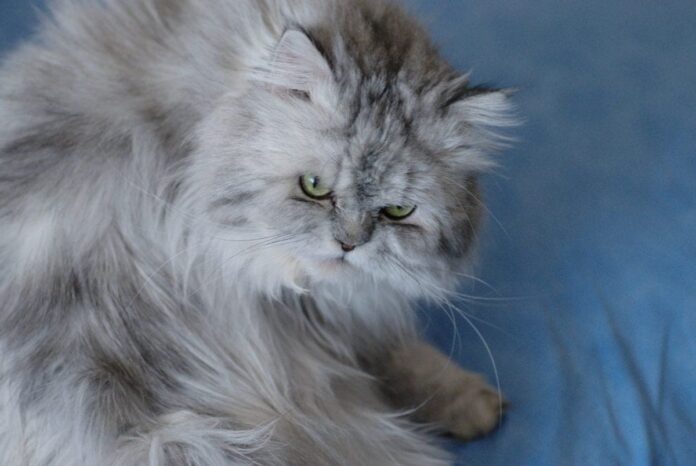 Siamese cats are one of the fascinating cat breeds due to their big personality, high intelligence, and being the oldest felines. These cats have been valued for ages for their unique patterns and are considered a status symbol. You will hear many stories where Siamese cats have been given gifts to dignitaries. They have been the official cats of the royal families of Siam or Thailand. These cats are primarily known for their creamy coats, pretty blue eyes, and very vocal nature. They can meow very loudly. It is also listed as one of the calmest animals in the world. 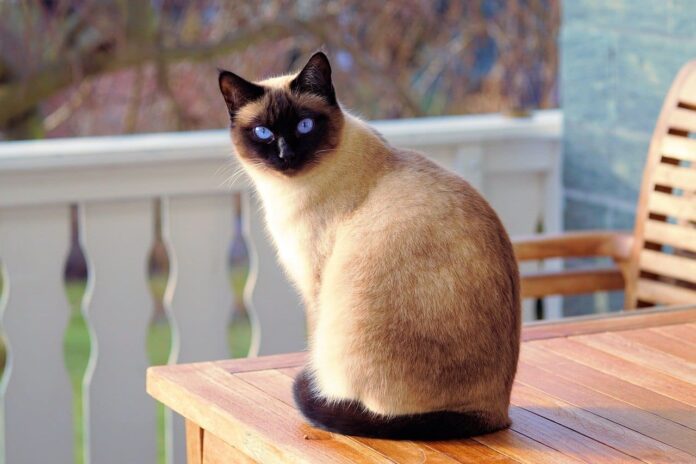 The Ragdoll cat breed is a large and powerful American cat and stays in an extremely relaxed and laid back way, giving the impression of a floppy ragdoll. If you’re looking for a pet companion, you can’t find a much better choice than the ragdolls! They are sweet and docile cats that can relax in your lap for a good cuddle and enjoy being held and carried out. They are even known to greet their humans at the door when they come home, just like dogs. They love to play in the water. It is one of the beautiful types of cats in the world. 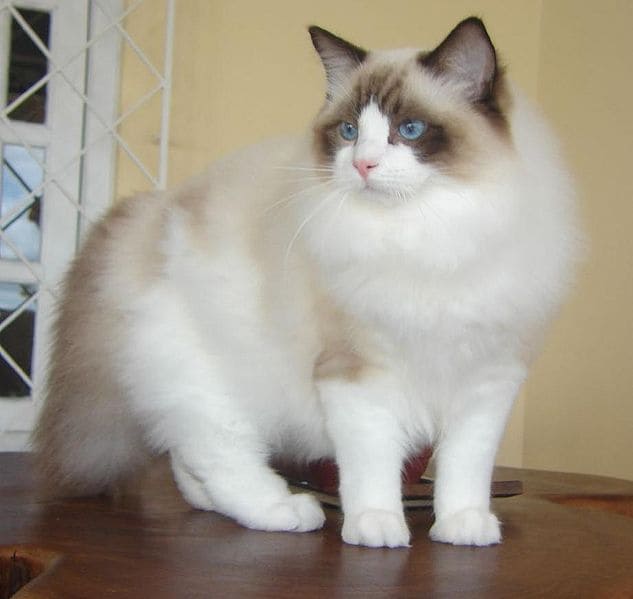 We all know ‘Maru,’ the notorious Internet cat from Japan, whose memes became popular globally. It is also the famous Scottish Fold, which is a domestic cat breed. This cat is known to have an “owl-like” appearance. It has distinct, drooping ears that bend down at the front, which is actually the result of a dominant gene mutation. These cats were supposed to originate in China, from where they were brought to England. They are sweet and charming cats but have delicate tails that can easily get hurt and become stiff if mishandled. 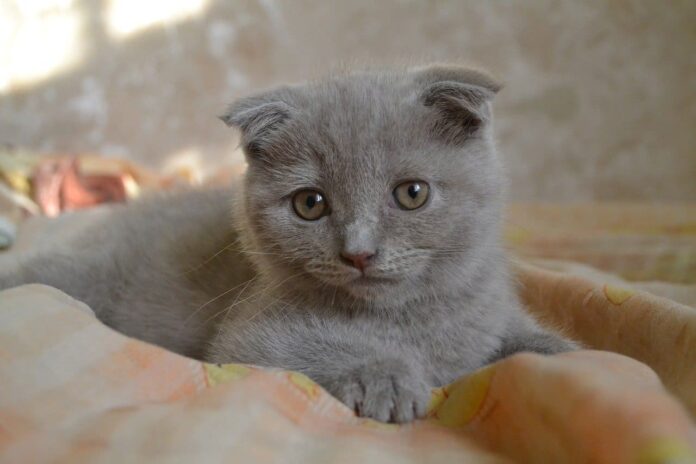 Aegean cats originated in the Cycladic Islands of Greece. It is considered a natural cat breed that has been developed without human interference. The development of the cat species began in the early 1990s by the breeders in the fledgeling Greek cat fancy. It is one of the oldest domesticated cat breeds and usually common as feral cats in Greece and Turkey. The species is considered a natural treasure in Greece. 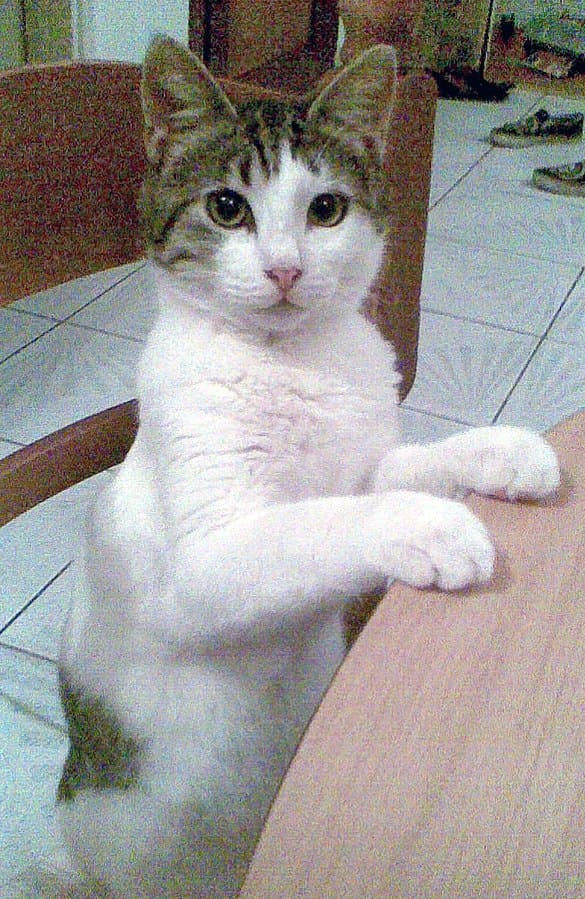 American Curl is one of the types of cats known for its unusual ears that looks like a curl back from the face toward the centre of the back of the skull. The cat breed originated in Lakewood, California because of a spontaneous mutation. The breed was discovered in June 1981 in Lakewood, California, the first American Curl was a black beauty named Shulamith. It is known for opening doors and cabinets. 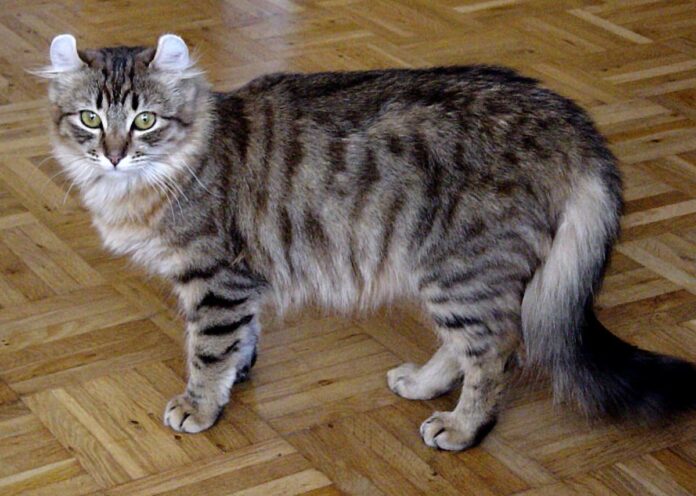 American Ringtail is an experimental cat breed that was derived from a California cat named Solomon. The story starts in 1998 when owner Susan Manley started a breeding program to reproduce his unique curled tail and which was similar to the other feral cats in northern California. There are no ill effects of the genetic mutation and the cats with curled tails were bred with Ragdoll cats and American Shorthair cats. 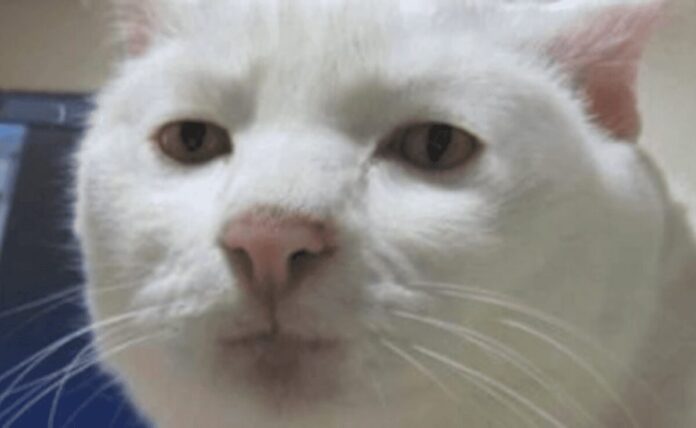 American Shorthair breed is originally descended from Europe with a total of 80 different recognized varieties of the species. It is known for its short pointed ears, its round broad head, and its muscular, compact body. The unique characteristic is their short hair that can be easily maintained by the owner. One of the members of American Shorthair known as Shawnee Trademark was declared Best Cat of the Year (COTY) by the CFA in the year 1965. 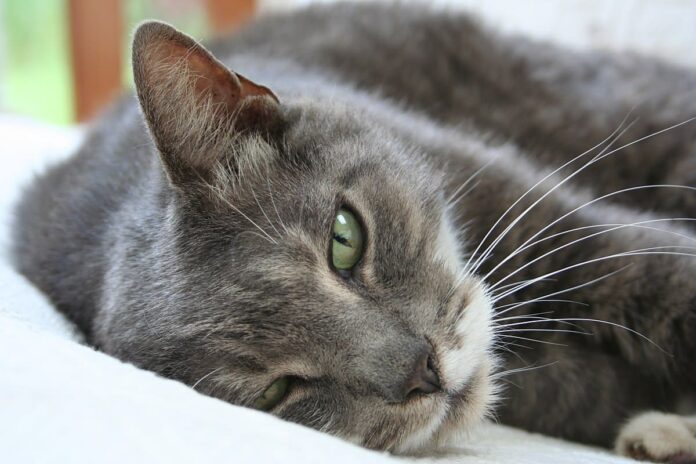 American Wirehair is an affectionate and playful cat breed known for its rounded shape head with a slight upturn at the outer edges of the eyes. The species is very good for children and senior citizens. The avarage lifespan of the species is 18 years in the wild. It can grow upto 60 cm (2 ft) in length and weighs approximately 6.8 kg (15 lbs). 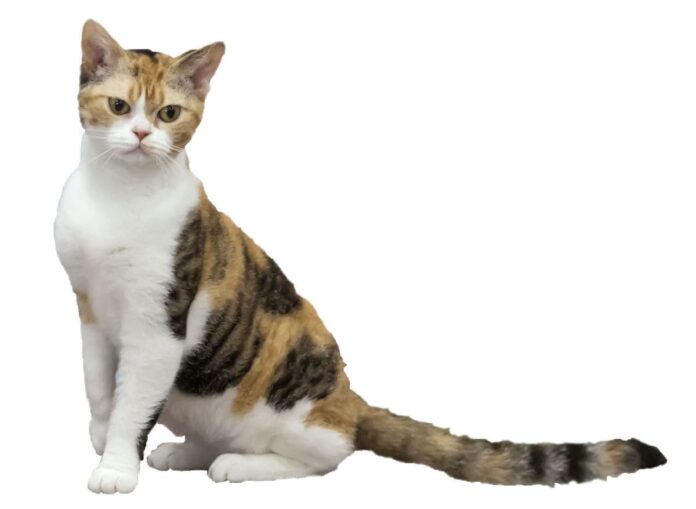 Just like Aegean, It is also a natural cat breed that means they have developed without any human intervention. The breed is known for its gentle, loving, and intelligent nature. It is an excellent family pet and loves being with children and senior citizens. It is believed to be originated on the island of Cyprus. It is one of the types of cats that has both longhaired and shorthaired variants. 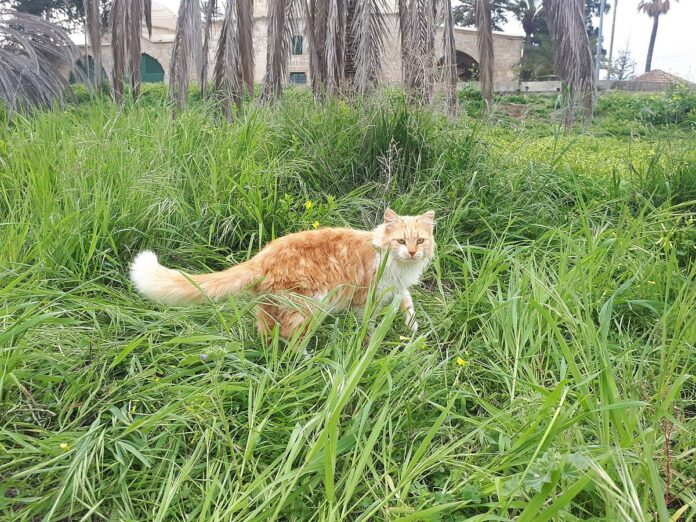 These are some of the interesting types of cats present across the world. There are many more varieties, each more distinct than the other. There are some Polydactyl cats that are born with a congenital anomaly where the cat has more than the usual number of toes on its paws. Polydactyl cats can have six or more toes on each paw, while regular cats have four to five toes on them!