Home Nature 10 Types Of Spiders In The World 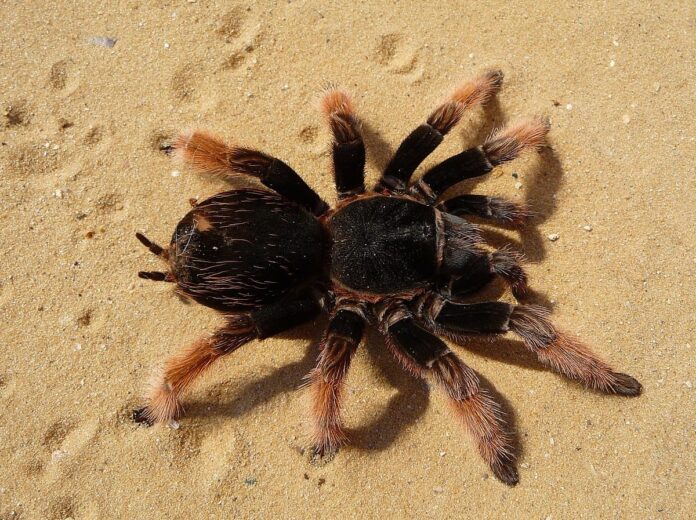 Spiders are arthropods species that means they have 8 legs along with chelicerae with fangs that inject venom. They have a diverse population in the world and can be seen across the globe. As of now, 45,000 known species of spiders and can be seen across the globe except Antarctica. Almost all the spiders have an avarage lifespan of 1 to 3 years, however, female ones can be seen living up to 30 years. The smallest spider in the world is the Patu figure that can reach upto 0.37 millimetre (0.014 inches) and the biggest spider in the world is the Goliath Bird-Eating tarantula with a legspan of approximately 28 cm (11 in) and body length of up to 11.9 cm (4.7 in). Let me list down some of the most common types of spiders in the world,

Wolf spider are members of the family Lycosidae and known to have agile hunters with excellent eyesight. These spiders do not spin a web and they resemble nursery web spiders. It can grow around 1 – 30 mm (0.04 – 1.18 inches) and have large obvious eyes. They have unique eyesight and they can be easily identified with the help of their eyes reflect light very well. The Wolf spider has a total of eight eyes but only two are large and prominent. It can inject venom and the most common symptoms are itching, swelling, and mild pain. They are territorial species and thrives in areas from scrub to woodlands.

Jumping Spiders are the largest group of spiders in the world and have more than 6,200 known species. They love to thrive in tropical forests but can be seen in many different locations across the world. The spider species belong to the family Salticidae and appear in a variety of colors, shapes, and sizes. Jumping Spiders can be seen across the globe with the exception of the North and South poles. These spiders are tiny and have the ability to leap up to 50 times their own body length and hence the name. They dont use webs for hunting and can easily jump and catch their prey.

Ground Spiders are small types of spiders that can grow upto one-half of an inch in length. It can appear in different colors but most of them can be seen in brown colour and has bright orange or red markings. They are hunting spiders and do not build webs instead rather chase down the prey. Almost all ground spiders are night hunters but some are active during the day. They are mostly seen beneath stones and logs and within leaf litter and indoor, they can be seen found scurrying along baseboards. It belongs to the gnaphosidae family of spiders.

Sac Spiders scientifically known as Cheiracanthium belongs to the genus of araneomorph spiders in the family Cheiracanthiidae. It was first described by Carl Ludwig Koch in 1839 and mostly pale in colour where abdomen range colour from yellow to beige. Both male and female ranges from 5 to 10 millimetres (0.20 to 0.39 in). It can grow upto one-quarter of an inch in length and mostly seen in the eastern United States specifically from New England through the Midwest. This is an outdoor spider that prefers to breed inside homes and other buildings. Yellow Sac Spiders are types of spiders that are a nighttime hunter that feeds on small insects and possibly even other spiders.

Crab Spiders are a family of spiders with about 175 genera and over 2,100 species known species till now. It is also known as flower spiders or flower crab spiders are types of spiders that belong to the family Thomisidae. They used to thrive in gardens, meadows, woodlands, tropical rainforests, grasslands, marshes and scrublands. It can grow from 0.16 to 0.3 inches in length where females are larger than males. Talking about the appearance, females are white, pale green or yellow coloured with two pairs of red dots that can be seen on the abdomen. Males are darker coloured and have greenish-white abdomen covered with brown stripes. The avarage lifespan of the species is one or more years in the wild that depend on the species.

Brown Recluse Spiders are also known as the fiddleback spider, brown fiddler, or violin spider has unique violin markings on their back and they have shy and nonaggressive behaviour. They are mostly seen in the outdoors in the U.S. Midwest and loves o thrive in the same environments that humans do. They are one of the types of a spider who are venomous but the bite doe not result in large, necrotic lesions where surrounding tissue dies. It used to build small and irregular webs to capture its prey and used to hide in the dark and move around at night searching for prey. It can be controlled with insecticides on non-carpeted surfaces.

American House Spiders are one of the types of spiders that can be seen all across the world not only limited to the United States. It is also known as the common house spider loves to thrive in homes, garages, sheds, and even in furniture. These spider species are not dangerous to humans and the most severe bite from one of these spiders may feel similar to a bee sting. They do carry venom, howvever, it rarely injects it into humans. Talking about the appearance, they have dark markings on their abdomens and females has yellow legs while males have orange, both have dark bands on the legs.

Tarantulas are types of spiders that belong to the family Theraphosidae. It has more than 900 species of spiders who are capable of moving jaws up and down. Spider species has 8 tiny eyes that has the ability to distinguish the slightest movement and hairs that cover the body and they are extremely sensitive to vibrations. Tarantula spider species does on a spin web and used to bites its prey with long, curved fangs that can make the prey helpless. Tarantulas have a strong defence system that can lean back on their haunches with the help of head and legs. It will expose their curved fangs in an intimidating display.

Camel Spiders are types of spiders or animal that start with the letter c and come with ten legs where two of these limbs are really pedipalps and sensors are there to locate the prey. These spiders are arachnids and belong to a different taxon called solifuges. They are fast enough who can run up to 10 miles an hour and can grow up to six inches long and almost up to a third of their length is taken up by their terrifying jaws. It is also known as sun spiders, wind scorpions, beard cutters and even Kalahari Ferrari and loves to eat insects and sometimes lizards, snakes, and rodents. Camel Spiders can be seen across the world.

Hobo Spiders are types of spiders known as funnel web spiders mostly seen in North America. The female species can grow upto 11 – 15 millimetres and male ones can grow upto 8 – 11 millimetres. These spiders used to construct a funnel-shaped structure of silk sheeting and then wait for the prey insects to blunder onto their webs. Talking about the appearance, these spiders are brown in colour where male spiders are distinct from female ones in that they have swollen appendage. It loves to stay in isolation except when they want to mate. It used to thrive in dry and warm environments weaving its webs on any object near the ground.